Honoring Chee Gong in a city that would forget him 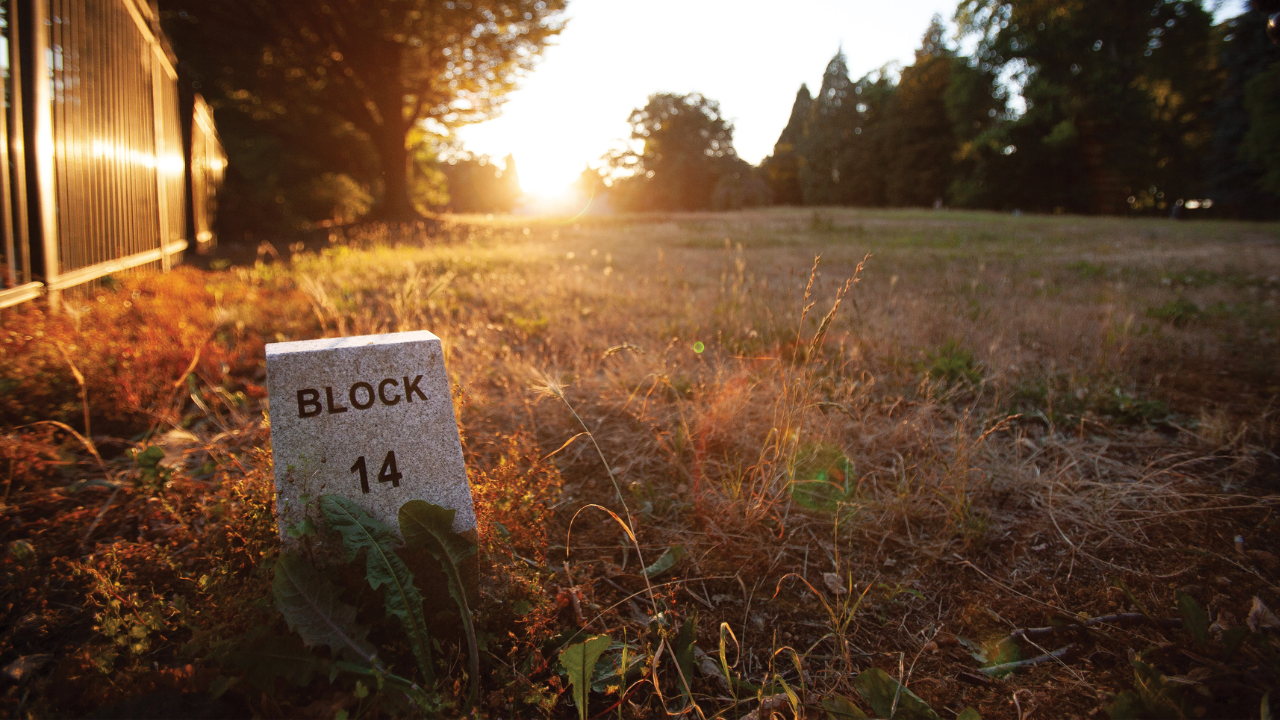 The historic Lone Fir Cemetery, in Southeast Portland, is a unique urban green space with towering Douglas firs, rolling hills of ornate monuments, and bucolic views of a rapidly gentrifying cityscape. But one corner of the cemetery, known as Block 14, is conspicuous for what isn’t there: no grave markers—not even any dilapidated or vandalized plinths—no trees, no meticulously managed topiary. With its low fence and patchy grass, the lot resembles an abandoned field. In fact, it is the final resting place for hundreds of migrant Chinese laborers who are buried in unmarked graves. Among them is a man named Chee Gong.

Every Halloween, the Friends of Lone Fir Cemetery produce the Tour of Untimely Departures. Families are invited to walk the cemetery grounds and watch community volunteers perform in costume and makeup as they tell the stories of some of the more notable people buried at Lone Fir. This not only opens up the cemetery to local residents so they can come hear and experience these stories, but also prevents vandals from desecrating the space on one of the most likely nights for such things. There are firefighters in vintage uniforms, well-to-do pioneer patriarchs and matriarchs, saloon brawlers, sex workers, and mental asylum patients. Children in costumes collect candy from folding tables at the cemetery entrance, and paper lanterns light the way between stops.

Several years ago, I was asked to join the tour and play Chee Gong, a Chinese migrant laborer who was convicted of murder and hanged on August 9, 1889. As one of the few actors of color in this town, I was not surprised to hear that the tour was having difficulty finding a community volunteer to play Chee Gong. I was, however, surprised that they were telling his story at all.

I was born and raised in Portland, and I’ve always been struck by how thoroughly amnesic our communities are. We have never had any sense of continuity, of connectedness to our collective past. We quickly forget the reasons why things are the way they are, and indeed, we usually remember things differently with each recounting. Why aren’t there any grave markers for the Chinese laborers and indigent asylum patients buried at a historic cemetery? For at least eighteen years, we’ve known that these markers are missing. Why haven’t we done anything about it?

On November 6, 1887, Lee Yik was murdered at the Chinese Theater in downtown Portland. Three suspects were immediately arrested: Fong Long Dick, Chung Lee, and Chee Gong. Lee Yik was a member of a family association, also known at the time as a “highbinder society,” “gang,” or “tong,” that was a violent rival of another family association to which Chee Gong and the other defendants belonged. During his trial, Chee Gong acknowledged this, testifying that his former employer, also a member of Lee Yik’s tong, owed him unpaid wages, and that he was being framed for murder as a result.

The evidence that convicted Chee Gong was all supplied by members of Lee Yik’s tong, and each witness delivered identical testimony. Contemporary commentators have inferred that the witnesses were perjuring themselves for the sake of scoring a conviction against Chee Gong’s tong. The evidence was flimsy enough that Chung Lee was exonerated, and Fong Long Dick’s sentence was commuted to a few years’ imprisonment. But Chee Gong was found guilty by an all-White jury at a second trial and sentenced to death.

In spite of a clemency petition, Oregon Governor Sylvester Pennoyer refused to intervene and commute the sentence. In an interview with the Morning Oregonian on August 2, 1889, Pennoyer said, “I cannot see for the life of me why I should interfere. … The Chinese must be made to understand that the laws of the land are superior to the laws of the highbinders.” Three years earlier, in 1886, Pennoyer had successfully campaigned for governor with the slogan “Keep the Mongolians Out.” When his second term as governor ended, he was elected mayor of Portland in 1896.

Chee Gong vigorously testified in his own defense, drawing condescending praise for his impassioned eloquence. He objected to being handcuffed and hooded per the legal requirements of a judicial hanging, begging that his accusers and killers see his death without sparing anyone the messy evidence of their lies. Unusually for the time, he was hanged in a woodshed adjoining the Multnomah County Jail, likely in response to the notoriety of his case. On August 10, 1889, Chee Gong was quoted at length in the Morning Oregonian. He said, “I no kill man. I die in woodshed with black cap over my face so I no can see nothing … Chee Gong no kill man. He is innocent, therefore he should die in the open air. One week ago when sheriff come to me and say ‘Chee Gong, you must die next Friday,’ I say ‘all right, hang me in the yard.’ What for sheriff no do? What for he hang me in the woodshed? I go to hell I die this way… All ye friends, I want you all to look me in the face, and see what you can see. I no do nothing. I no kill Lee Yick.”

The sheriff issued just forty tickets to Chee Gong’s hanging, but the Morning Oregonian reports that well over a hundred people crowded the jail grounds and stood on buildings overlooking the woodshed. Chinese merchant Seid Beck, who had organized the failed clemency petition, paid for Chee Gong’s burial, but there is no marker. Was it lost? Was his grave left unmarked to prevent desecration? Was a marker deemed one step too far for a convicted murderer? We have no way of knowing.

In 1896, seven years after Chee Gong’s execution, the Morning Oregonian ran a story about a man who would burn incense and make food offerings at the entrance to the jail yard, in the hopes of appeasing Chee Gong’s angry ghost. The article read, “Haunting a jail yard … was anything but congenial pastime for a disembodied Mongolian spirit on the warpath for his enemy’s scalp, even that of a hanged Mongolian, and it was to apease [sic] its longings and nightly wailing that this heathen Chinese, with more devotion to his dead friend than is found in the hearts of many Caucasians, came to this lonely spot in the jail yard contributing relief according to his religion, firm in the belief that his act quieted the perturbed spirit for another brief period of time, and always hopeful of seeing the spirit of his dead friend released and on its way to the happy hunting grounds in the flowery kingdom.”

On Halloween in 2017, I played Chee Gong as the last stop in a ten-stop walking tour of Lone Fir. I accepted the role because I wanted to remember Chee Gong, and I wanted others to remember him, too. I had no interest in affirming the pleasant, self-congratulatory interest in “local history” that most people who attended the Tour of Untimely Departures were seeking to perpetuate. I wanted to shake their complacency, wipe the smug expressions off their faces. I wanted to speak on behalf of the hundreds of people in those unmarked graves in Block 14—people who didn’t look like today’s happy, comfortable, housed residents of inner Southeast Portland—and I wanted to show young Filipino and Chinese children that there are adult creatives who might mirror their own aspirations. My grandmother was ethnic Chinese, and though I have no connection to local Chinese communities, I presumed that this gave me some legitimacy. Besides that, I resent the entire calculus around performing ethnicity, which is peculiar to non-White roles and especially onerous for actors of color.

Embodying my identities is how I survive. By doing work like this, I’ve successfully convinced White audiences that I’m not a threat, that I’m not depriving a “more deserving” White person of a job. My Shakespearean training was the most sophisticated code-switch I could adopt: the training ensured that I would never speak with an “oriental” accent and that my artistic perspectives would conform to prevailing norms. But all that work, all that training, cannot erase the uncomfortable aspects of our history.

As Chee Gong, I performed to around five hundred indifferent audience members, broken up into smaller walking groups. I don’t remember seeing anyone of the same ethnicity as me, or really anyone of color. I wore a “mandarin collar” tunic and baggy slacks. A volunteer makeup artist attempted to give me “zombie” makeup for the occasion, but we had trouble with the makeup pigments, which weren’t designed for people of color, so I just looked vaguely dirty. My segment was a five-minute monologue that wove in newspaper quotes with other facts about the unmarked graves. I’d like to think that I spoke from a place of emotional truth, that I succeeded in connecting with audiences that weren’t expecting to be shaken by Chee Gong’s story, but I have no real way of knowing this. After about twenty performances, I came away from the night exhausted, unspeakably sad, and determined to do more to honor Chee Gong’s memory. I knew that my version of him could only be a distortion of his truth, which is irretrievably lost to us, in the same way that the exact location of his grave is lost.

Chee Gong was murdered by Sheriff Penumbra Kelly and Governor Sylvester Pennoyer. He was unjustly convicted of a crime that no one seriously believed he committed, and we can’t bring ourselves to place a stone so that we can remember where we buried him, or hundreds of others. If those graves remain unmarked, we won’t know where the cemetery ends and the city begins.

This essay will appear in "Memory," the Summer 2022 issue of Oregon Humanities magazine. 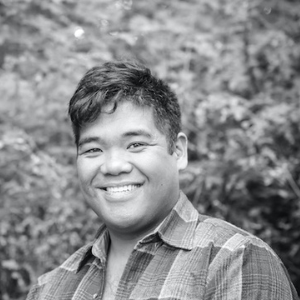 Paul Susi is a theater artist, activist, and educator who was born and raised in Portland. He next appears onstage in Northwest Classical Theatre Collaborative’s production of The Fever by Wallace Shawn (August 17–September 9), which will be performed in the abandoned Victoria’s Secret store in the Lloyd Center, and then will tour to private homes and other locations, closing at Oregon State Penitentiary.