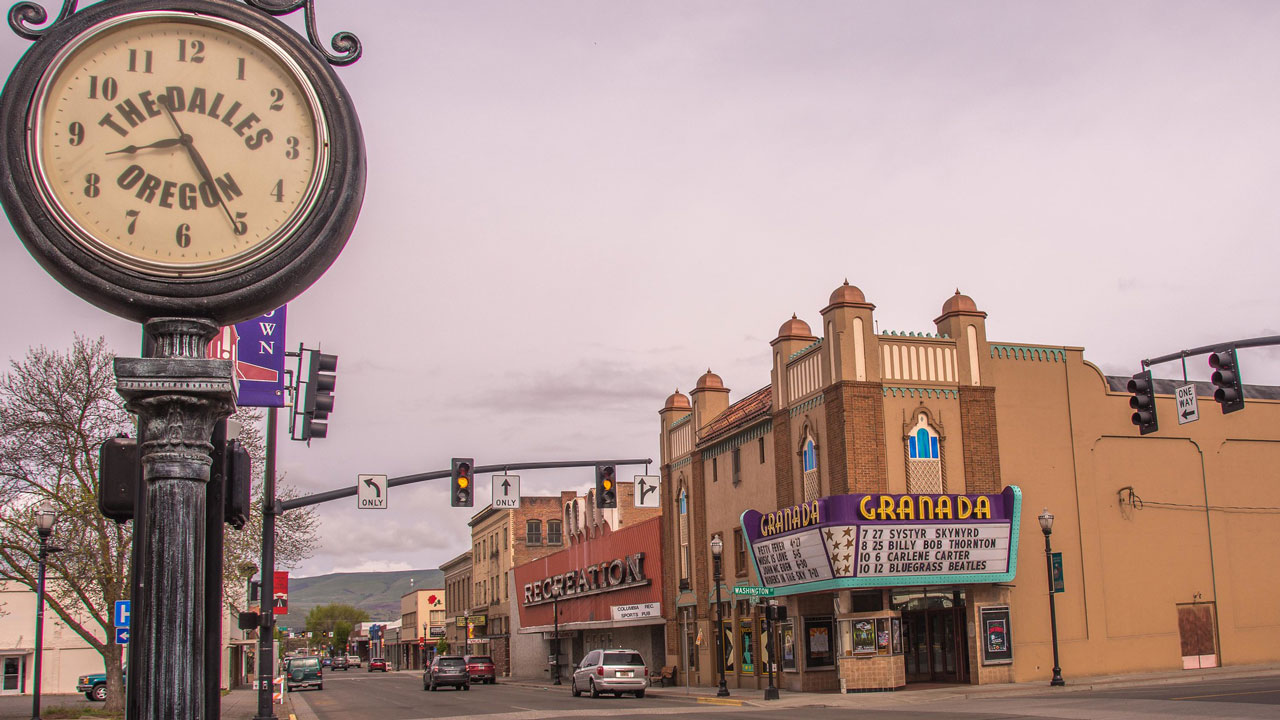 This morning, unshowered and with a hard-boiled egg and black coffee in my stomach, I did a loop by foot through downtown The Dalles in order to scope out the rumblings of a weekend carnival. My hair was short against the shape of my skull, just like it is every day now, and my off-the-shoulder sweater was bent into an awkward V-neck under the weight of my hoodie. My sunglasses were round and patterned and my lipstick was assertive, and I caught sight of myself in one of the many empty storefront windows, thinking for an affectionate moment how strange I am capable of looking. I am starting to accept my body as is, androgynous though it may lean. I carry my body like someone out of place, largely because I’ve always experienced it that way. But as I age, acceptance and feeling like an outsider seem more like the same thing. Looking at myself in the glass window where the dry cleaner used to be, I considered for the first time the real possibility of my gender being less than immediately locatable.

At the carnival, a very tall muscular man asked me, yelling over the sound of empty kiddie rides in full force, if he could “check out” my sunglasses—polite enough, though he did not stop talk-yelling until I agreed to try his on, too. He wanted not only to see what I looked like wearing his sunglasses but for me to see what I looked like in them, too. I walked away with the strange feeling that he had mistaken something about me in his initial approach, that perhaps he’d meant for something more flirtatious, or more intimidating, until he saw that I was just a girl made up of equal parts sincerity and thick skin. I went along with his conceit without so much as a gendered care in the world: I did not laugh at his jokes, and I was not scared of his testosterone, and it never occurred to me, through every second of his performance, to do anything other than talk back, even while casually holding his sunglasses as collateral for my own preferred ones. Less offended than confused, I realized that The Dalles is many shades of friendly. Like when your boss, at the yearly staff picnic, gets a little too friendly-friendly; or when your mailman delivers a friendly reminder that your next student loan payment is due-friendly. The shades are as varied and unimpressive as the yellows and browns endemic to our local ecosystem, where grasses are bunchy and shrubs severe.

I have long been desperate to talk about how downright strange and frequently backwards this place is, a city wanting in culture beyond smoke shops and "wifebeater" undershirts, beyond dogs that wander collarless in the middle of the road and a senior center whose digital display flashes, in red and green font, “Test Test Test 1234.” This city makes it hard to define the experiences that exist between high school and retirement. And yet I continue to like this place. Or rather, I care about it.

The Dalles: home of offensive murals celebrating settlement and conquest, and anxiety-inducing fountains, hardship illustrated in dirty colors. We like our old automobiles and our primitive dive bars, and we don’t mind eating whatever makes the cherries so red and glossy. There are painful open mic nights, a brewery that makes the only beer my partner has ever poured out onto the grass, a neon sign museum with no lights out front. There’s an abandoned middle school at the foot of the Eagle Caves, where a graffitied trail leads you up and around cliffs below the town’s high peak of shrub-steppe glory. Standing above the spray-painted caves, everything becomes itchy and sedimented and defensive.

I cannot help but feel grounded by this place, particularly after spending a day further west in the bourgeois magazine bubble of Hood River or the expensive weirdness of Portland. The Dalles always strikes me as a little bit odd and a little bit inclusive in the way it marries the specter of past generational values with the vague promise of authenticity. There is something about this town that keeps me believing beyond its discriminations and deficiencies, something that makes me want to remain a young person here despite there being so few of us, hesitant to exacerbate our absence. Every place, every corner, every family is trying hard. You feel it on the main streets and in the wind that bends around cliff and corner, in the downtown traffic lights blinking their way through Sundays, yawning and yellow.

When I find myself on the receiving end of sadness and confusion when some new acquaintance learns that I live here, and when that new acquaintance proceeds to question this fact as if seeking an answer to justify their pity, defensiveness and resentment form a knot in my head, so that I feel I am now looking at a person I will never fully trust. It is a ritualistic exhaustion that comes from being frequently reminded that I live in a place that does not resonate with the impression others have of me, a place I should not like. But the truth is that I choose to live in The Dalles, and that I find this place largely beautiful, and that I have the overwhelming sense, more often than not, that I can breathe here.

Last summer at the Fourth of July parade, I watched cops and reservists in police cars and military tanks—no cheerleaders, no floats—drive by and wave, beaming at the curbside witnesses who stood safely and waved back. When did it become normal and safe to stand beneath drones, to gaze at fighter planes, to have an imagination that ignores the imaginations of the policemen passing by? The city smelled of fire, and those of us who did not have to be at work at 10am on a Wednesday constituted only a thin and diffuse crowd. We did not cheer. We barely gestured. Who has access to celebration mid-morning in the middle of a work week? It was a reminder that freedom, even in its most commercialized forms, is still not accessible to all. My partner and I did not stay long, finding it necessary to turn away from the camouflage and candy, from the muscle cars and glittered, accommodating horses, their cantering legs both fancy and belying a deeper instinct to bolt.

Who would choose to live here? I am not interested in defending so much as adding, in complicating what the answer to that question can look like. Less than a week before Independence Day, The Dalles had its own version of the nationwide rallying against children being separated from their families at the southern border. People held signs, and shared their signs when too many people in one cluster seemed to lack them, and honked the horns in their cars when they drove by and realized what was happening, and we grew, and grew, and grew. The People, the whole of us, got bigger as more bodies showed up; the growth was collective. There was waving and smiling and outrage and sharing of space, and on the infrequent occasion that an angry driver threw out harsh words or middle fingers, we laughed and waved, saw ignorance for what it can fundamentally be in the face of community gathering: less powerful.

The Dalles: we have Womxn’s Marches and Pride Events, diverse landscapes and the sad, dynamic grappling with the theft of these lands from the Wasco and Wishram people. We have small businesses and new businesses, citywide health initiatives, and a community garden. We are full of desert yellows, sure, but also mint green and green that looks like river water and green that moves like the river, too. What looks bare is usually a different kind of abundance.

There is beer I drink happily, and food I can order without saying “no meat,” and a new wildlife mural set against a bright teal background that forces freeway passengers to second-guess their decision to pass by the town with the strange name. We insist on that determiner, on our two-word name, having formalized our distinctiveness or at least folded our desire to be unique and important into the nomenclature itself. So that every exclamation is a little bit invocation, too.

I am telling myself a story about the place I live, and in doing so I am telling a story about myself: my flaws, traditions, and attempts; my capacity for being progressive as well as oblivious as well as stubborn, sometimes all at once, as if the functions reside in the same district of my heart. Perhaps loving a city is not unlike the complicated experience of loving a person, how the grandeur and simplicity of it are extensions of the same radical gesture: paying attention.

Here’s what I see when I look around The Dalles: Chipping paint and signs posted where houses are filled with mold. Trash everywhere, so much of it, carried by the wind and unamended by passersby, too often myself included. Dog poop in the middle of the sidewalk at all times of the year. Disheveled yards, broken toys, goatheads stuck in the bottom of my shoe.

And here’s what I notice: The way the city lifts and lowers around bluffs and rolling streets and old growth; the sudden smell of lilac in the spring or laundry detergent in the fall as you walk the rising and falling neighborhoods and feel the sky move vertically. The way biodiversity practically rings through the air as it shifts all manner of leaves and branches and flowering shrubs. The taste of local produce, dirt and all. And the unattractive hillsides, glowing with burnt-yellow inhospitality, how they belie the reservoirs and organisms that live beneath the surface of things and make this place what it is. 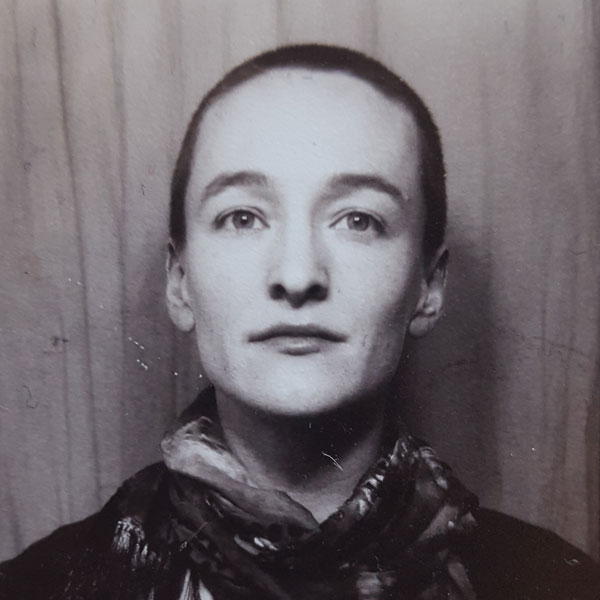 Sarah Cook lives and writes on the Oregon side of the Columbia River Gorge. A social worker by day and Bewitched enthusiast by night, her writing has appeared most recently in Chaleur Magazine, Utterance: A Journal, Culturework, ASAP/J, and Black Warrior Review. Find her talking to cats or bugs or at freelancefeminist.com.

Wow, Sarah. I was so moved, enraptured almost, by your essay here. Your exquisite, careful, lovely articulations and your beautiful prose. In friendship...Corenne

Thanks for writing this article; i enjoyed the spirit in which it was written. To me it feels autobiographical and oddly hopeful. An inspiring reminder of the deeper, richer nature of the "ordinary" world around us.

Your poem to The Dalles is much appreciated by this resident. Lovely.

Thanks for writing this. Wonderful and visceral. Very much alive. Your character sketch of The Dalles and of you is great.