“We Know Who’s Got Our Six Now”

How the Father’s Group is elevating Black life in Bend 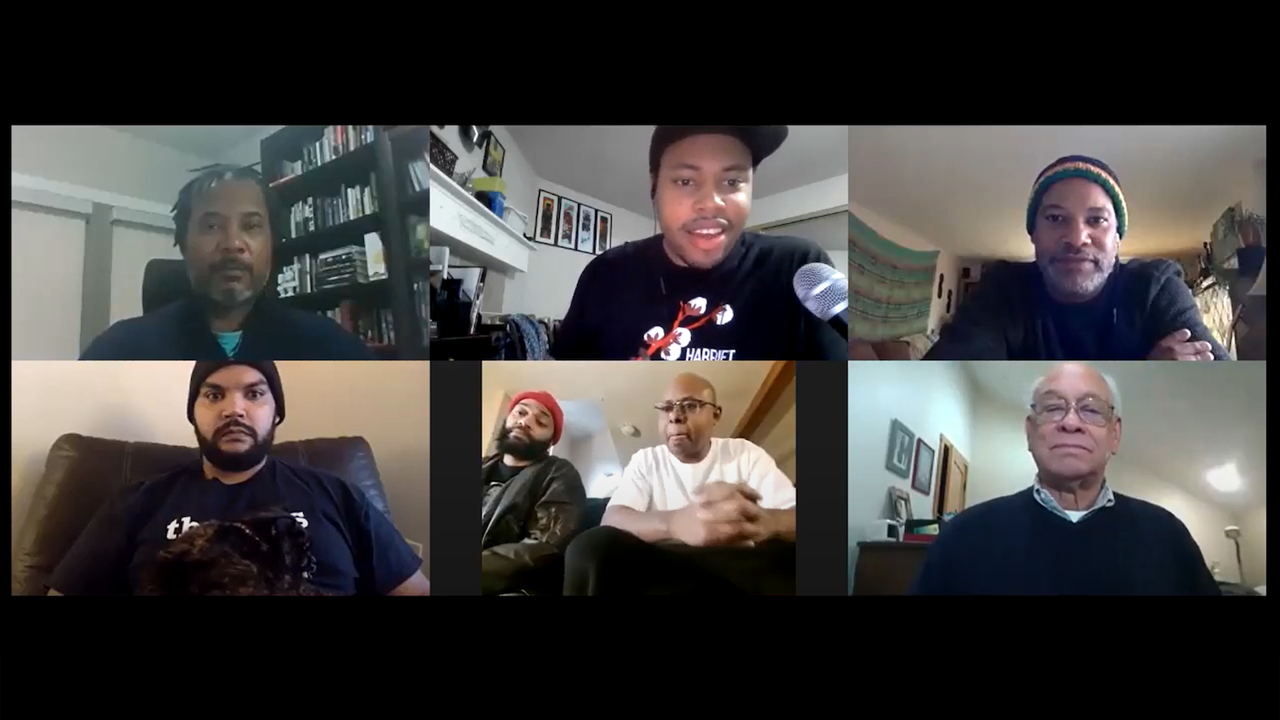 In celebration of Oregon Humanities' fiftieth year, each month in 2021 we will publish an interview with a forward-thinking Oregonian on what the future holds for our region. This month's story contains excerpts from an interview with the Father's Group in Bend by Bruce Poinsette, recorded as part of his series The Blacktastic Adventure: A Virtual Exploration of Oregon’s Black Diaspora. Launched in late 2020, this ongoing project illuminates the stories of Black communities across Oregon through interviews with artists and organizers.

What does the future of Black-led organizing look like in Oregon? To me, it looks intergenerational and unapologetic. It looks like the white gaze no longer dictating how we advocate for and interact with each other. It looks like connecting our different enclaves across geographic and identity barriers, and building collective power. Perhaps most importantly, it looks like templates that already exist. Consider the Father’s Group in Bend.

The intergenerational collection of professionals formed in 2019 and comprises men born and raised in Bend, longtime residents, and recent transplants alike. Their work includes providing direct support to students, helping educate the community, and engaging Bend’s various institutions, such as the schools, police department, and city government. Ultimately, their goal is to help students develop agency and build awareness and understanding of the systems around them so they can better navigate life in Central Oregon and beyond.

“We have to be ready to arm our kids for the onslaught of the Eurocentric, power-focused culture,” says Dr. Dalton Miller-Jones, a member of the group’s executive board. “That’s what we’re up against. And we’re doing that in an honorable, authentic, and prideful way.”

David Merritt, president of the Father’s Group, moved to Bend in 2011 from Oakland, California. One of the first things he noticed was the lack of a Black community. His daughter would come home from school crying, and he needed other fathers to confide in who understood what they were experiencing.

“Everybody else has a community,” says Merritt. “We need a community. You have to be able to talk to somebody.”

After connecting with a few other Black fathers in the area, Merritt and the group started meeting weekly. At first, the meetings were just a space to commiserate over their shared frustrations and concerns for their children.

For men like Dave Chisholm, vice president of the Father’s Group, the meetings couldn’t have come at a more critical time. A fifteen-year Bend resident, he particularly empathizes with Black students who feel like they’re dealing with mental health struggles on their own.

“I was on that edge in the first meeting,” says Chisholm. “It’s a terrible feeling to feel alone.”

Many of the fathers were already engaged with Bend’s institutions independently, and the meetings soon evolved into organized action. Bend’s Black population is 0.6 percent according to the Census Bureau. Though small, it includes people with a wide variety of backgrounds and life experiences. Tackling the many unique issues Black community members face required an intentional, wide-reaching approach. Two early focus areas for the group were identity and basic safety.

“We know who’s got our six now,” says executive board member Gordon Price, a longtime staffer at Central Oregon Community College. “That’s the cool thing about the Father’s Group. It’s a support for us as fathers but it’s also a support for the community behind us that we’re trying to rear.”

Miller-Jones, a retired psychology professor who moved to Oregon from New York, notes that even in places like Portland, there isn’t an institutionalized Black community. This complicates identity issues, especially for the large portion of biracial students in Bend.

“They don’t want to be identified as being different than their suburban playmates who are white,” says Miller-Jones. “At the same time, they know they’re Black. They know there’s a history. They may not know the history, but they know there is one.”

For Trey Gibson, who grew up in Bend and has a litany of memories of being bullied and called the N-word, working with the Father’s Group was an opportunity to be the Black mentor he wished he had as a young man. One memory that sticks out in his mind is when he retaliated against another student for calling him the slur, and the school only suspended him, not the other student. Experiences like that one have spurred him to get involved with the City of Bend’s restorative justice process.

In a relatively short amount of time, the Father’s Group has become a major player in many diversity, equity, and inclusion initiatives by the City’s and local school districts. The organization has worked with the police department on hiring and training reform and was involved in the selection process of the most recent Bend chief of police. The group was also heavily involved with the selection of the Bend-La Pine School District’s superintendent and participated in teacher prep and DEI training.

The institutional partnerships are not perfect, and Father’s Group members are not without skepticism. However, the group has been able to counteract potential roadblocks by asserting its agency and building a strong infrastructure.

For Father’s Group member Jason Graham, an artist who goes by the stage name MOsley WOtta and was recently recognized as Bend’s first Creative Laureate, members’ commitment to the “boring” work has been crucial to the organization’s rise.

“It’s fun when it’s flashy,” says Graham. “I was so suspicious of the protests when they first happened here in town. Not because I didn’t believe in the heart of the thing, but I wasn’t sure how many of those folks out there were interested in boosting Instagram account numbers. It’s a very different thing to be able to conceive of an idea versus being a father all the way through, from the seed on.”

Executive board member Marcus LeGrand, an educator at Central Oregon Community College who does much of that “boring” administrative work, adds that it’s not just about being willing to do the work, but also showcasing Black professionals.

“We want to show the professionalism that is far beyond what people think we are,” says LeGrand. “People don’t understand, Black professionals have to go through a lot just to have one piece of anything in this world.”

By virtue of filling a vacuum in the community, many Father’s Group members note that they have an opportunity to redefine perceptions about Blackness for many in Central Oregon.

“In an area where there’s not a lot of people that experience the Black culture or know a lot of Black people, the role that the Father’s Group plays is pretty important because now they see positive Black role models,” says Price. “They see Black men helping out with the Christmas drive with the police department. They see Black men out giving away backpacks before school starts. They see Black men acting as welcoming mentors, welcoming people of color to the city. That’s changing how we’re looked at in this country.”

As with the rest of their work, the goal is to create a foundation for future generations.

“We’re trying to leave our blueprint in the community,” says Chisholm. “This is for our kids’ kids.” 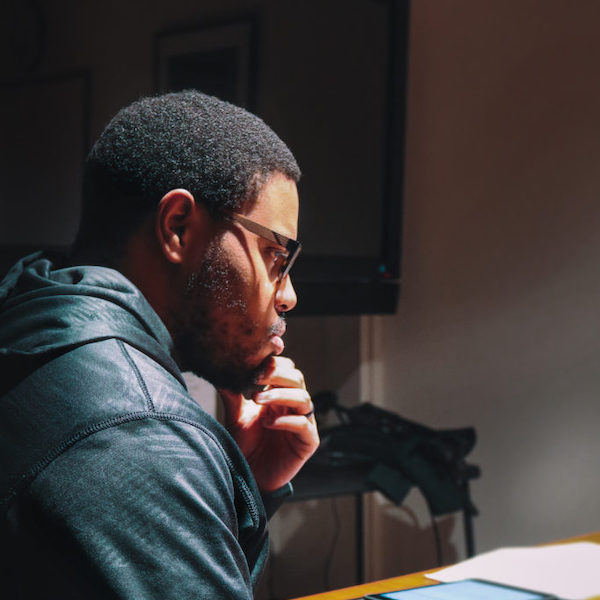 Bruce Poinsette is a writer, educator, and community organizer whose work is primarily based in the Portland Metro Area. He hosts "The Bruce Poinsette Show" on 96.7 The Numberz FM and the YouTube series “The Blacktastic Adventure: A Virtual Exploration of Oregon’s Black Diaspora.” A former reporter for the Skanner News Group, his work has also appeared in the Oregonian, Street Roots, Oregon Humanities, and We Out Here Magazine, as well as projects such as the Mercatus Collective and the Urban League of Portland’s State of Black Oregon 2015. Poinsette also contracts with the University of Oregon Equity and Inclusion Office and numerous Oregon nonprofits and teaches journalism and creative nonfiction with Literary Arts’ Writers in the Schools program. In addition to his professional writing work, Poinsette volunteers with Respond to Racism LO, a grassroots antiracism organization in his hometown of Lake Oswego.