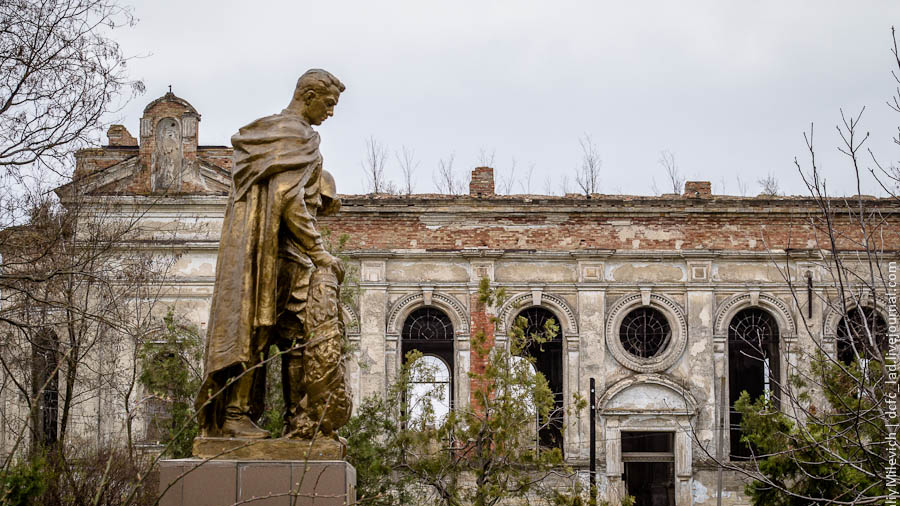 I stood in dappled sunlight inside the ruinous old Catholic cathedral in Uspenskoje, Ukraine, and asked my translator about the words stenciled in red paint on the limestone wall above where the altar had once stood. "All Hail Our Glorious State!" he read, a line from an old Communist hymn, painted there in Stalin's days, back in a time when some people, at least, could still say such things with a straight face.

I looked around me. Large holes in the roof sent shafts of sunlight angling down between the twin rows of battered columns. Weeds grew between the trash-strewn paving stones inside the abandoned church while outside a half-dozen white goats grazed on the churchyard weeds. Looking around it was obvious that the state of this church, this village, and this nation were nowhere close to being glorious and hadn't been for a good long time. Turning to the opposite end of the church I asked about another inscription, a crudely spray-painted graffito located inside the vestibule.

"Well," Sergey sheepishly told me, "basically, what it says is, 'Fuck it all--what's the use? I might as well kill myself.'"

Lately, I too have been wondering just what the use of it is—not of life itself, which, as long as I have love, is always worth living--but the use of writing a literary work at a time when so very much, the earth itself, seems to be dying. Why bother with history? Why bother at all? I can't bring myself to seriously believe that anything I write will stop the present horrors or prevent the further horrors which are coming any more than they can prevent the horrors of the past. Really, it's all so damned hopeless that I might as well kill, if not myself, at least my scribblings.

In my darker moments I feel so terribly lonely though, and this is the cure, the only cure I know for that: to raise a holler and to see if anyone answers. Perhaps, in that, there may be a measure of solace, for myself and for my readers, that wasn't there before.

It is troubling to me to write about my ancestors, my family, their history, and their world lost to time. They were nineteenth-century Germans and I am not. I could not be a German, or a man of the nineteenth century, any more than a speckled trout could climb a tree. It just isn't in me. I cannot pretend to have much of an understanding of them, beyond what I've learned from books. Book knowledge is better than no knowledge, but it's only the uncertain memory of descriptive passages, and not bone knowledge, which is come by naturally, by living it without ever questioning the how and why of it.

Judging from what little I do know, this unquestioning existence seems enviable to me in many ways. They seem so self-assured, the old ones, though perhaps this is only because they are long dead and so their fate is already complete. When looking backwards, things always make more sense than they did at the time when they occurred. You can look back across the centuries and compose a narrative that connects what had seemed like a series of random events. And perhaps this is what appeals to me about their story, just that it is a story. How nice to contemplate that--much tidier than a contemporary story-in-progress such as my own small life.

I am no expert on history or culture or philosophy and so very much of what I understand is just the indistinct shadow of things, an understanding fraught with emotion and not much tempered with reason. Well, I am human. This is really my only qualification for this work and the only basis for anyone to trust what I have to say.

It's true that whenever people look to their ancestors they are likely to find them both historical and romantic, if not in themselves, then as part of their times. It is also true that the further back in time you look, the more ancestors you have. They grow in a mathematical progression: two parents, four grandparents, eight great-grandparents, sixteen gr-great-grandparents, thirty-two gr-gr-great-grandparents: sixty-two ancestors in six generations, about 150 to 200 years. Six more generations, about 350 to 400 years ago, yields 2,048 ancestors living in the time of the Thirty Years War, plus another 6,152 who came in the centuries after them--8,190 in all; six more generations takes you to the Renaissance and something on the order of 131,000 ancestors, each of whom, you can bet, had an interesting life.

There are people who make a hobby of genealogy, collecting ancestors much like others collect seashells or postage stamps. In some cases it becomes an obsession, as any hobby can. Sifting through microfilmed files and computerized lists can be great fun, a puzzle more complicated and compelling than a crossword, a diversion that can last for years rather than an hour or two. In the end, however, what accumulates is useless unless put into context, within the framework of history.

They lived; they died. So what?

A great empathy develops between the researcher and the subject. This is particularly so when the subject is one's own family's history. They, the forgotten and now rediscovered ancestors, don't lie easy or quiet in their long ago. Once exhumed from their archival graves they often sit up and insist on being remembered, demand justification for their lives, beg for an understanding of themselves and their situation. They want their story told and that story is, because they lived it when they did, part of the story we call history.

The uses of history are many but all those uses come about because it allows understanding, and understanding, in any sense, always comes to us as a story. People need stories as much as they need food and shelter because survival, at its most basic level, requires a sense of identity. As William Kittredge pointed out, a large part of what we mentally struggle with in our lives is the development of a story about ourselves that helps us to understand our world and our role in it, a story to make our lives livable. As significant changes in our understanding come along, the story also must be altered to reflect those changes. It is an essential yet slippery process, a constant refining of something which is, on one level, the basic knowledge we act upon and yet, on another level, mere play with imagery, a convenient and changeable fiction. Society itself follows this same mythological route to self-awareness that we, as individuals, travel. What makes Russian, German, and American culture distinct from each other is a matter of differing and evolving stories.

I have, I've heard, something called a "carbon footprint." I believe that my generation is the first of my family to consider such a thing. Certainly my father and grandfather never heard of anything like it. The scientists say that it takes ninety-nine years to recapture the carbon dioxide released by burning the remains of Jurassic swamps and that this residue lingers behind us like a footprint in the sand, evidence that we passed through this "vale of tears" long after we're gone.

The effects linger in ways we little suspect. A century ago the coal smoke from the S. S. Graf Waldersee rose above New York harbor on the day my grandfather arrived in the United States and, by now has finally become locked up in living matter. Five percent of the residue of World War I still drifts about the planet and 30 percent of the crematory smoke of Auschwitz lingers, seeking to become new life. Just as the soil eats the bones of the dead and makes them into more soil, so the air we breathe is made, in part, of the residue of past lives.

There are other traces of old events which linger on long past the days when anyone who lived those events is still living, ones not made up of molecules but of less substantial stuff, of memories, attitudes, and the emotions we feel in contemplating the past. These form a sort of Karmic footprint, as real and serious as any greenhouse effect. How long does it take to sequester ancient hatreds? It often seems to take longer than ninety and nine years. It is this collective memory of events and their effects, the retelling of the story over the decades and centuries which shapes a people and leads them to healing or to destruction.

I wish this story was a simple one, neat and tidy, polished over the centuries like the old folk tales, the sort of thing a child could understand and listen to over and over again, finding delight in the telling more than in the plot and characters. But a family's story grows longer the more often it's told and to tell it all would take hundreds of years.

I've tried many times to get it right, to explain how one family became seven, which became thirty or more and so on until no one knows anymore just how many families we are. Maybe it's better to tell how our cousins came to live in Asia, Europe, South America, and North America, or about what they left behind and what they found in their new home lands.

Where should it begin? With the birth of a man named Johann-Georg Heilmann in a small Alsatian village in 1781? Or perhaps with his great-great grandson George Heilman, an American soldier, cold and hungry and horrified in the frozen forest of Ardennes in the fateful December of 1944. Maybe it would be better to talk about bread, how it smells fresh from the oven, or how the Pacific Ocean below Point Fermin looks just like a field of green-bearded wheat bending under a North Dakota prairie wind.

The trouble is that a good story should have a beginning, a middle, and an end. But how can I tell you that "Once upon a time..." when what happened occurred many times, in many places, to many people? And how can I assure you that "...they lived happily ever after," when so many of us are still living, and others, not yet born, are part of the story too? Like the dragon who devours his own tail, there is no beginning or any end to this story, or rather, it is all one beginning, which is all one end and therefore all one endless middle.

Maybe it's best to try to imagine all these people as the same people, as though it were one and the same family's life, and all the events of the past two centuries happening to the same father, mother, and children. Our awareness of time makes them seem separate, existing before or after one another. Maybe we should try to see with the eyes of God: all things, all time, all events, all simultaneous.

Robert Leo Heilman is an award-winning essayist and author who lives in Myrtle Creek, Oregon.

Illustrating the systems that move salmon, waste, traffic, and legislation

I think often of the taste of my grandfather's grapes and of the meat from my father's knife. An essay by Hanna Neuschwander

Between Ribbon and Root

Hope and a history of tragedy live together in a Cowlitz woman's son. An essay by Christine Dupres