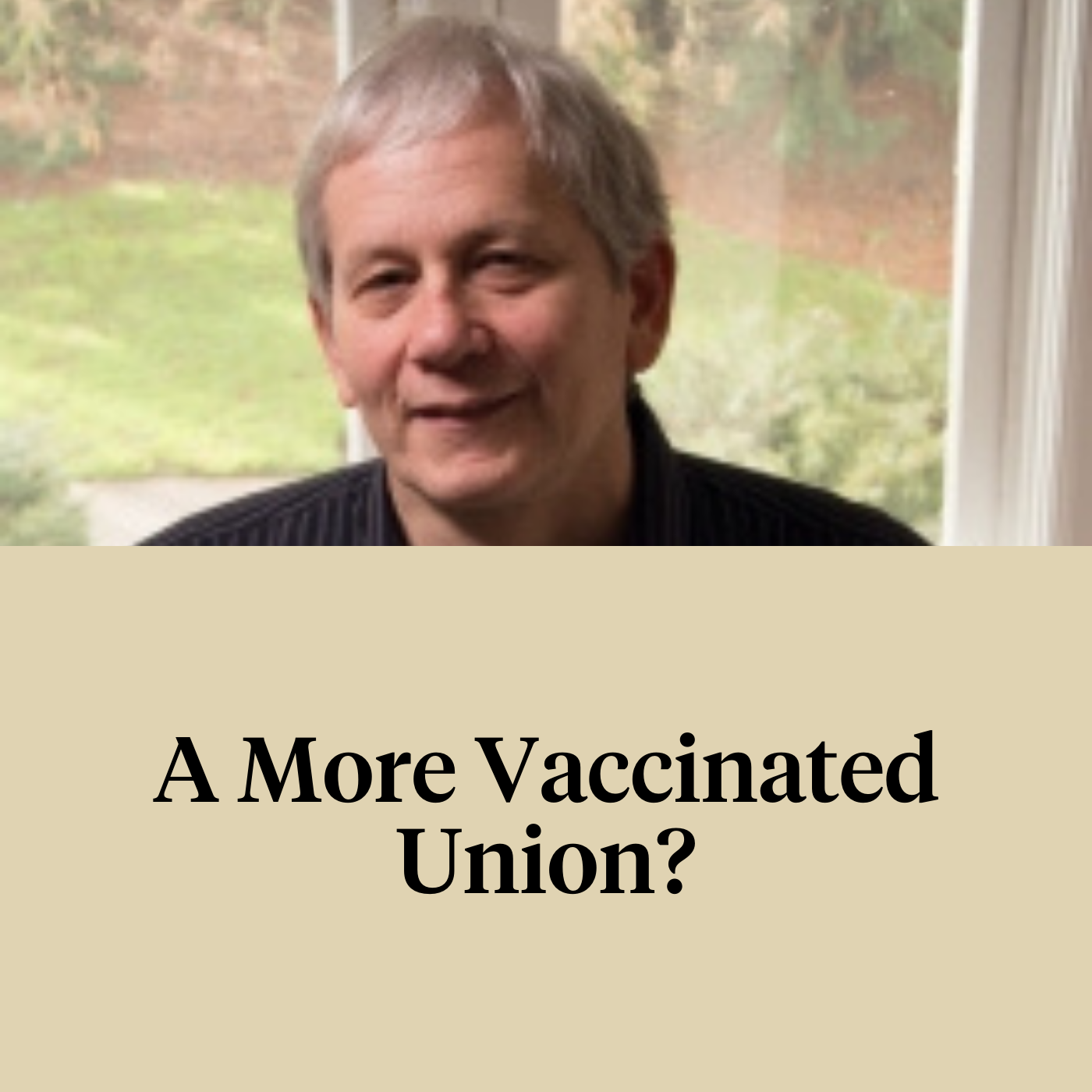 This week, we're bringing you an episode extra inspired by our episode “Communities of Contagion” with Eula Biss. Our conversation with Eula happened in 2015, long before pandemic was an everyday word. We wanted an updated conversation to take a present look at the moral responsibility we have to everybody in the time of COVID. So we spoke with Courtney Campbell, a medical ethicist at Oregon State University who engages in conversations about the ethics of vaccinations.

Courtney S. Campbell is the Hundere Professor of Religion and Culture and Director of the Program in Medical Humanities at Oregon State University. A scholar in medical ethics and religious ethics, Campbell has written reports on religion and bioethics for federal advisory commissions and has served on ethics committees for local, regional, and national hospice programs on physician-assisted death. He is a fellow of The Hastings Center.

His most recent book is Moral Realities: Mormonism, Medicine, and Bioethics.

Adam Davis: Hi, you're listening to The Detour by Oregon Humanities. I'm Adam Davis. This week, we're bringing you an episode extra inspired by our episode “Communities of Contagion” with Eula Biss. Our conversation with Eula happened in 2015, long before pandemic was an everyday word. We wanted an updated conversation to take a present look at the moral responsibility we have to everybody in the time of COVID. So we spoke with Courtney Campbell, a medical ethicist at Oregon State University who engages in conversations about the ethics of vaccinations. The conversation with Courtney bridges important ideas of immunity and democracy, and we wanted to use this opportunity to share it with you.

I sat down with Courtney in January 2022 at the XRAY FM studios in Portland, Oregon.

Courtney Campbell: One of the narratives that we've tried to put together as a country is a narrative of solidarity. We're all in this together. And yet the experience of COVID does hit certain people and not others. As much as I would like to say, “We're all in this together, and if that means everyone gets COVID, we'll pull through this together,” I think our sort of culture of individual responsibility and individual differences pushes against that. What I think is important is an ethics of solidarity.

Solidarity would mean that, yes, I'm concerned about my own health and I need to take precautions, but I have a responsibility as a citizen in this country of being concerned for my fellows, for the everybody. So that if there's actions that I engage in that may put others at, at some kind of risk, then I need to modify my behaviors.

It's a really difficult kind of ethical question in our society because we're so focused on personal choice, freedom, don't have restrictions on, on personal liberty. And I'm not saying that these should be legally enforced or mandated, I’m just saying that there's an ethic of solidarity that should lead us to care for other persons and care for the most vulnerable. And that ethically entails the responsibility to take precautions and not be so concerned about the me rather than the everyone.

Adam Davis: It's interesting hearing you say that, because I feel like that's the core of a lot of arguments about how we live in community together: Couldn't we live in ways that show that we care about each other? Isn't there room for more solidarity and less of a sense of what's good for me? And so that that's true when it comes to housing. It's true, probably, when it comes to transportation, it's true in all these different ways. And now we're in a situation where,  when it's physical health and community health, it seems to illustrate even more clearly, even more indisputably, the challenge of a focus on individual good versus community good.

Is your sense that this is in some way an opportunity to change the story around solidarity? Or is it re-inscribing the same story we keep telling?

Courtney Campbell: Yeah, that’s a really wonderful question. My hope is that, because of the sort of social ruptures that COVID has displayed, whether it's, again, different kinds of perspectives where people just do not seem to care about each other or the issues of health equity, where individuals from various marginalized communities or disadvantaged communities just haven't been able to have access to tests, to vaccines, to technological information. COVID has exposed the social fragmentation. If we're at a kind of inflection point, what I'm hoping is that this would push us more toward social solidarity. Now I, right now, I'm not terribly optimistic about that. But I have a sense of sort of the general goodness of human beings, that if a case can be made to individuals that there's more in this situation than what's good for me, there is a civic responsibility, ethical responsibility, and a commitment as a citizen to seek the common good. To go back to some of the values, even inscribed in the constitution that ultimately what we're trying to seek a more perfect union. And that includes everyone.

Adam Davis: That’s interesting. While you were talking, I was thinking about listening to the conversation that this conversation's going to be paired with, and that is Eula Biss six years ago. And at one point she says she didn't think after four years of digging into vaccines and thinking real hard about the research that she was going to come up with “follow the rules,” that that was going to be her conclusion. In many contexts in her life, that's the last place she ends up. But with vaccines—and again, this is pre-COVID, this is sort of standard sets of vaccines—she ended up after lots of research, basically saying, “Follow the rules is the best way to go.”

And along with that, it seems like, is kind of trust that even if there's corporate incentives in here, bottom line, they're still doing community good, even if they're also enriching themselves. And I guess I want to ask you, do you feel like, especially as someone who's practiced philosophy for much of your life, which is often a sort of contradictory and counter-cultural endeavor, do you feel like you're surprised by where you end up when you think about how to respond to COVID?

Courtney Campbell: I think my views have shifted rather significantly because of, I think, the unique nature of COVID. Historically in my field, the principle of autonomy or the principle of self-determination is sort of the be-all and end-all of medical ethics. And I've certainly done my share to promote that kind of approach. We don't want— and that's in the legacy of historical, what's called paternalism where the state acts as a parent towards us and sort of treats us as children or physicians treat their patients as children.

I've found my views about ethics in general, about philosophy, moving. I mean, I'm not abandoning notions of self-determination, but saying there are circumstances—and I believe public health crisis, a pandemic is one—where some of those rights and personal liberties have to give way toward what's going to be in the common good and what can bring us all together as a community.

Adam Davis: I've been in nonprofit work for a couple of decades, maybe more if I am realistic about my age. And I think one of the challenges is wanting to push people toward more of a sense of solidarity. And so I'm always wondering, when is that appeal working? What makes an appeal for more solidarity resonate and have an effect? I guess I want to ask that question of you. Do you have a sense of what helps arguments or stories for solidarity land?

This conflict of individual rights and freedom and of the common good is really built into the founding documents of this country. You've got the Declaration of Independence and the Bill of Rights that are really kind of rights-oriented, individual oriented. And you've got the constitution that says to preserve the common good for we the people. It doesn't say us as individuals. We the people, in order to form a more perfect union, provide for the common defense, and so on. And it does say to secure the blessings of liberty to ourselves and our posterity.

Adam Davis: I myself still play basketball. It's been here and gone. And I think about the choices that go into that and the kind of ethical choice: wanting to make sure that we're not spreading something. And then there's also a kind of, what about play? And so I think I just want to ask, what do you think about the pull of play when ethical questions feel like they're weighing over so much of what we're doing in the world right now?

Courtney Campbell: Oh, that's a wonderful question. I find that play—and it's largely, I have to say with my grandchildren, since I'm not coaching any longer—play provides a wonderful escape from the realities of what we might be facing.

The reason I enjoyed coaching youth basketball so much was I was able to get away from my computer, get away from my office, and just find myself in a zone that I was just zoned in and working with players on skills and plays and all that stuff. I think that play is just absolutely vital to who we are as persons and absolutely vital for our continued mental and emotional health in this kind of pandemic crisis that we're facing.

Adam Davis: Do you feel like there are any questions or even a question that continues to pop up for you related to how we're living through COVID?

Courtney Campbell: I'd say the primary question that recurs for me is, Why is it that there's such a resistance to acknowledging that COVID is a severe threat? Why is there such resistance to vaccinations?

Again, there's a lot of reasons, some of which we've talked about, for that resistance or that vaccine hesitancy. Some of those predate COVID. I find myself bewildered at points about why the resistance—it even doesn't necessarily have to be these vaccines, there are other kinds of contexts.

If you look at the primary demographic group, it's White evangelical Christians. I'm a religious believer myself. I have a hard time understanding why people that have a commitment to the healing processes of display and scripture and the like and see medicine as a vocation of healing, why they've opted out at the level of roughly 30 percent of that population, which has become the largest religious broad community in the United States. There's some dissonance there that I just need to explore, but it's but it's a recurring question.

Adam Davis: Thank you. I do think in a way bewilderment is a fitting place to conclude. But for now, what I want to say, Courtney, is thank you for the thinking you have been doing and for sharing some of your questions, your thinking, and your bewilderment.

I really appreciate the time talking with you.

Adam Davis: You can find information about Courtney's work and publications in the show notes on our website, oregonhumanities.org. Thanks for listening to this episode extra by The Detour. See you next time.

Listen on the Radio

Learn where we're airing on community radio stations across Oregon.

The Detour is a new monthly show about people and ideas from Oregon Humanities. Listen to the latest episode here.