A single mom wonders what we owe our children. 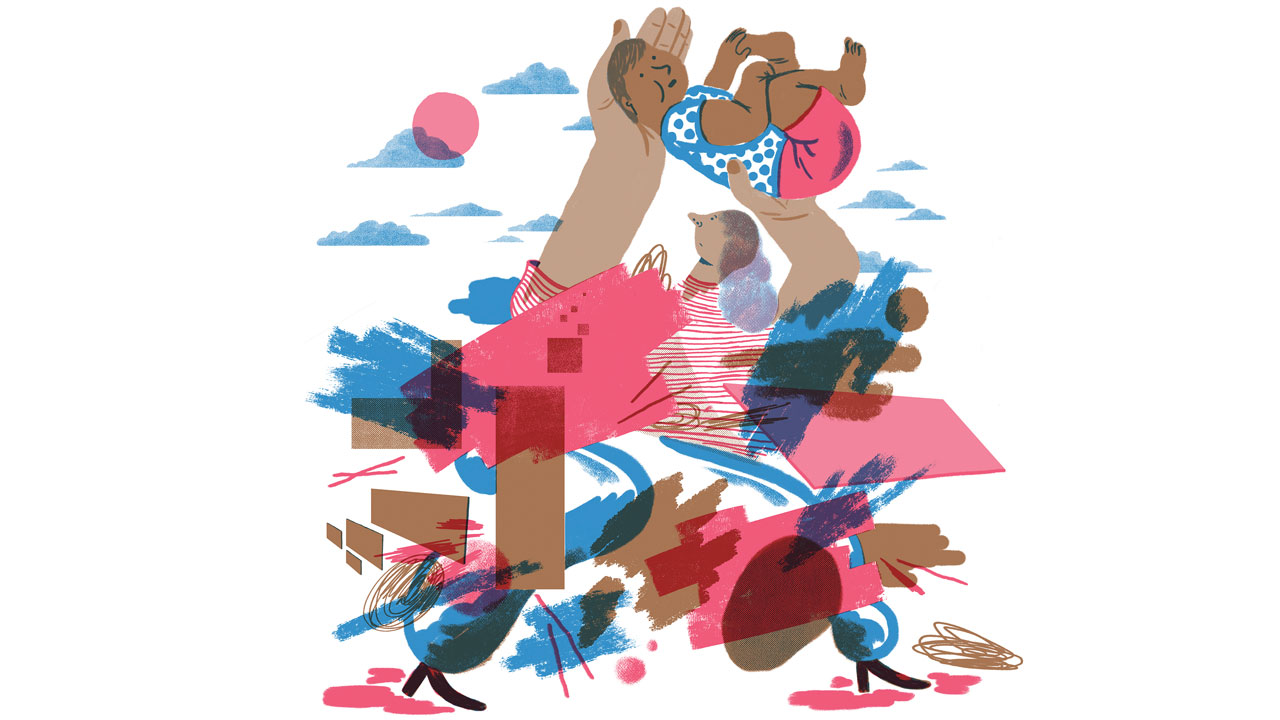 The pink room smelled like baking bread, and the carpet sank beneath my feet like the duff of some primordial woodland. A tiny playground crafted of unpainted wood sat against one wall, and a child with strawberry-blond elflocks whooshed down the slide on a silk cape. It was so different from the last childcare center I had visited that I nearly cried.

The owner explained their rates and their policies: a snack every morning, lunch with all the food groups before naptime, and stories twice a day. The preschoolers, ranging in age from two to five, baked bread every Wednesday and painted every morning. I would need to make sure my daughter brought her own ceramic cup for drinking water throughout the day, and a pillow and blanket with her name on them for naptime. A teacher scooped up a crying child and settled into a rocking chair, singing softly.

This preschool, Waldorf-inspired, treated children with tender dignity and encouraged imagination and wonder. Coziness had been rubbed into every surface. It was the sort of place I wished I could create in my own home, the sort of place I would be happy to leave my two-year-old. It was the first daycare or preschool I had visited where I felt I could walk out the door and feel glad that she stayed behind.

But to leave her there two and a half days a week would cost me more than my part-time job paid at the end of the workweek. I was a single mom living with my sister, dependent on food stamps and the Oregon Health Plan, and my student loans had just come out of deferment. I owned nothing that wasn’t secondhand or a gift.

I signed the paperwork. My daughter’s absentee father had just given me a check for $10,000, and this was how I planned to spend it.

I never planned to be a mother, let alone a single mother. In fact, my oldest sister had been a fine warning to me about the difficulties of such a task. She’d raised her daughter alone, cutting coupons and working overtime, watching her first-grader ride TriMet alone because Portland Public Schools offered no school buses and her boss offered no scheduling flexibility. I had seen what it was like, raising a kid alone when you were, at best, lower middle class. Growing up on the edge of poverty and always looking back over my shoulder at not-enough had left me with a deep fear of anything that looked like money problems.

My college years only compounded my difficult relationship with money. I started out level-headed, a scholarship student who worked out the cheapest possible breakfast in the cafeteria (an apple fritter, 95 cents, and a large milky coffee, 85 cents). But from term to term, I found ways to spend more. Was it exposure to my fellow students’ largesse that undid my caution? A part of me burned with embarrassment every time someone looked at my Walmart clothes and my homemade haircut. Another part of me hated other students’ families for sending them Starbucks money every time their student account ran dry or their bank accounts threatened overdraft. My own parents went without new glasses and trips to the dentist so I could have books for classes.

I wanted to live frugally in college. I wanted to be satisfied eating apple fritters and drinking cheap coffee—but even without the social pressure to spend money on lattes and pizza, there were just too many opportunities to make bad financial decisions.

I resisted a credit card for three long years. But then a table appeared in the commons that was staffed by representatives of Capital One bank. There had been a thousand credit card companies before them, but the couple at this table were just so much more cheerful than the usual batch of salespeople and charity representatives. They were certainly an improvement over the dour woman soliciting for Greenpeace or the frenetic man representing a program that would send you to Japan to teach English.

In the end, I think it was just something about the woman from Capital One. Her hair gleamed under the fluorescent lights, and her smile beamed the kind of white I never imagined teeth could be. My father didn’t even have teeth. While the man made some kind of pitch, I found I couldn’t take my eyes off the woman’s face. That was the reason I’d gone to college, wasn’t it? For clean, well-polished teeth and a blazer so crisp you could cut yourself on it?

I wasn’t lured in by the free dry-erase board or the low, low APR. I filled out the application for that credit card so I could feel even just a little like that woman. Like someone who could walk into a store and get the salespeople’s attention instead of the security guard’s. Like someone who could imagine going to Japan or even being able to make a donation to Greenpeace.

If my parents could have seen me, they undoubtedly would have discouraged me from getting a credit card, just the way my teacher had warned us in personal finance. My parents had filed for bankruptcy once. They knew what it was like to lose everything and to start again, poorer than ever. My parents would have given me spending money if they’d had it. They wanted more for me than they’d had. Isn’t that what parents do? Want more for their kids? Feel, deep down, like they owe their kids something better than what they’d had?

And I was doing better. After graduating from college with a reasonable amount of student loan debt and a not-unreasonable amount of credit card debt, I got a job selling sheet music. The money wasn’t great, but I was good at it, and my employer offered full health, dental, and vision coverage. The first time I got my teeth cleaned, my dentist couldn’t believe I lacked even a single cavity, despite a lifetime without dental care.

Then I got knocked up. My on-again, off-again boyfriend of four years made himself scarce, and my probably hormone-addled brain decided I already had a bond with the life-form growing inside me. I kept the baby, knowing all the while that the deck was stacked against her.

The statistics about children growing up in single-parent families paint a dark picture. Studies show that such kids are more likely to struggle in school and do drugs. I knew that a kid growing up with me as their only parent wasn’t looking at a rosy financial future. I had a lot of debt, and while I had a full-time job, I barely broke $20,000 a year. Moreover, that was my salary working five days a week, nine hours a day. I might have once yearned for money, nice clothes, a big apartment. But now such things seemed unimportant compared to spending time with my daughter. I couldn’t just leave her at daycare alone every day; she deserved more from me.

Parents say this kind of thing. Our kids deserve. I owe my child. But what, exactly, do we owe our offspring? We give them life, and we love them, and we try to teach them what they need to survive in the world. And yet that rarely feels like enough. The intensity of my love for my daughter makes me want to claw open the heart of the world and give it to her. I want to open every door that stands between her and her best possible future and then defend it with everything I’ve got.

Do I owe her this? Is there some debt I could possibly measure that stands between us? Can I chip away at the balance every month? Do ballet lessons reduce the amount? Do hugs? Does dinner together every night diminish the vast gap that lies between her now and her future, the gap I can only hope and pray she fills with life and love and good times?

Perhaps when we say we owe our children, we speak of what we can never repay our own parents, the time they invested in us, the care they poured into our own developing lives. We pay that life forward, perhaps with interest.

I could have been too proud to take that money, but I wasn’t. I used it to pay off my credit card bill and pay back some money I owed my family, and then I saved the rest to help with my daughter’s daycare while I re-established my résumé. That $10,000 check was the most money I’d ever seen at one time in my whole life. Even so, it was only a drop in the bucket of what it takes to raise a child. Years later, my daughter’s stepfather and I have certainly spent much, much more on things like health insurance and new shoes and a tremendous amount of orthodontia. And of course, he and I have invested every day of our lives in her, reading books together, traveling together, learning together, living together.

That check did not pay off the debt, whatever it may be, between my former boyfriend and my daughter. And I believe that he never hoped it could. The money was meant to pay a debt he felt he owed me—the cost, perhaps, of not caring enough for a woman who made a ridiculous decision that would never fit in his life.

Nevertheless, I treasured that money. I used it to give my daughter three years of teachers who encouraged play and stories and taught her to value her imagination. I used it to work only part-time, so that every day my daughter and I could be together as much as possible. I invested it in my family, and it repaid dividends it never could have earned in a savings account.

I bought a pink room with soft voices. I’d like to think it’s a start. 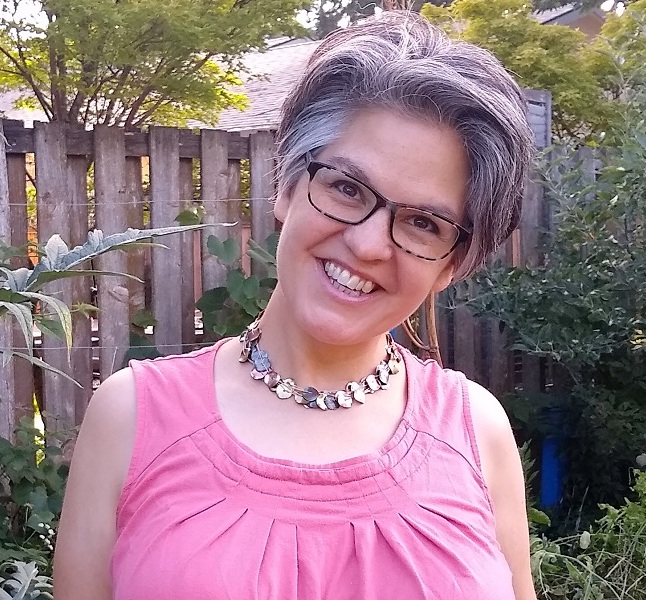 Wendy N. Wagner is the author of the forthcoming horror novel The Deer Kings. Her previous work includes the SF eco-thriller An Oath of Dogs as well as two novels for the Pathfinder role-playing game, plus over fifty short stories, essays, and poems. A Hugo award-winning editor, she is the incoming editor-in-chief of Nightmare Magazine. She lives in Milwaukie, Oregon, with her very understanding family, one tiny dog, and two cats.

Bobby Arellano on waiting for an alcoholic father to stand up

Are You My Mother?

When a new medication makes the Lois Ruskai Melina's mother more outgoing and impulsive, she must face a choice: Should she have her taken off the drug, even though she likes her better on it?

Between Ribbon and Root

Hope and a history of tragedy live together in a Cowlitz woman's son. An essay by Christine Dupres