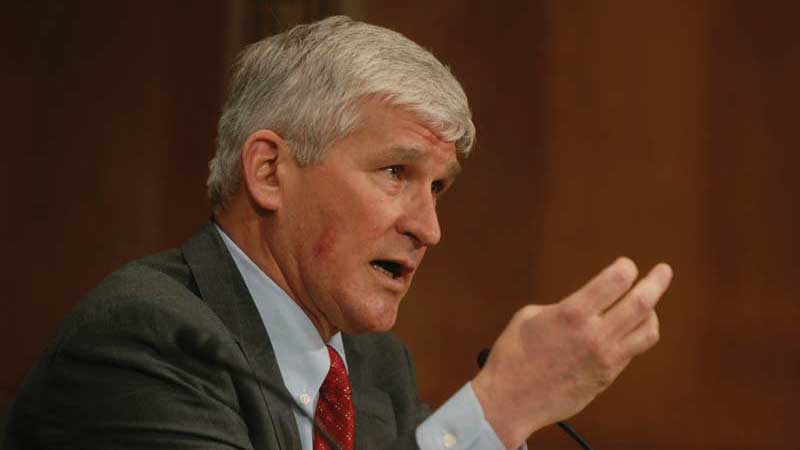 Andrew J. Bacevich is a professor of international relations at Boston University, a West Point graduate and former colonel, and a Vietnam veteran. He is also a prolific author and conservative historian who argues, controversially, that our foreign policy needs to undergo radical reexamination. In his books Washington Rules, The Limits of Power, American Empire, and others, as well as many articles and op-eds, Bacevich eloquently and passionately confronts the myths and assumptions underlying the reasons and ways in which we wage war, and provides unique and compelling solutions for changing the way we fight. Bacevich was in Oregon in May as part of the Oregon Humanities Center's lecture series on “Conflict.” Oregon Humanities was a cosponsor of the series.

Jill Owens: In Washington Rules, you describe a sacred trinity of assumptions that underlie American foreign policy that are never questioned. Can you explain what those are?

Andrew J. Bacevich: Sure. The central argument of the book is that in the wake of World War II, the national security establishment developed a set of habits or routines that may well have made sense when they were first instituted, but that in my judgment have long since outlived their usefulness. I point in particular to three deeply embedded tendencies in our military establishment. The first is to design US forces not to defend the country, but to provide instruments of power projection. The second is to maintain a global network of US forces, “a forward-deployed empire of bases,” as Chalmers Johnson memorably called it. The third is to marry these power projection capabilities and this global military presence to support policies of global interventionism.

JO: You write that America is in a constant state of “semi-war,” created by “semi-warriors.” Can you explain what semi-war is, and how the semi-warriors benefit from that state?

AB: “Semi-war” is a term that was actually first coined by James Forrestal, our very first secretary of defense when the office was created back in 1947. Forrestal was an arch anti-communist who was gravely concerned about the Soviet threat, and he believed that in order for the United States to conquer the Soviets, we would have to maintain a semi-mobilized status on a more or less permanent basis. He called this “semi-war.”

I've adopted the term and then applied it to the post-Cold War era. The Soviet Union is long gone. There certainly are threats to the United States, but to my mind nothing on the scale of what we faced during World War II and the early days of the Cold War. And yet this notion that we have to continue to be semi-mobilized really continues to prevail in Washington among members of the national security elite, and it continues to prevail at least passively among the American people at large, not in the sense that we approve of it, but that we basically defer to people in Washington to maintain this semi-mobilized state.

JO: You also mention that the politicians who bring these assumptions up for debate, like Ron Paul or Dennis Kucinich, become marginalized for not conforming to the orthodox way of thinking about foreign policy. How do you think a politician could bring it up so that it could enter the national conversation in a real way?

AB: I don't know. I think that Ron Paul on the right and Dennis Kucinich on the left have made a gallant effort to broaden the conversation about national security policy, and the lack of success that each has had I think is quite telling. It really says something about what's permissible in terms of the national security debate.

I've speculated that it would require some kind of a huge catastrophe to awaken the American people to the possibility that the Washington rules no longer serve our interests, but I have to say I've begun to despair of that ever happening. One might argue that 9/11 itself might have constituted a disaster on a scale that would at least permit people to allow some fresh thinking. One might have thought that the catastrophic aftermath of the invasion of Iraq might have led people to consider unorthodox ideas. One might have thought that the war in Afghanistan that has now gone on for more than eleven years might have opened up the conversation. But that has not really been the case. So the proponents of the Washington rules still seem to be riding pretty high in the saddle, at least in terms of being able to determine what's viewed as permissible and impermissible ideas.

JO: Your introduction to Washington Rules is a very poignant and moving description of the shift in your own worldview, which happened when you visited the Brandenberg Gate in East Berlin after the wall fell. You describe this as the beginning of your education. What would you recommend for Americans who are interested in fresh thinking and new ideas on foreign policy? How should they begin their own educations?

AB: I have come to believe that we are prisoners of an established historical narrative, a story of what our times have been all about. I think that that story, reduced to the simplest terms, is one that says that everything you need to know about the twentieth century is contained in knowing that World War I was followed by World War II, which was followed in turn by the Cold War. From a European perspective, and the perspective of many people on the planet, that story has been a catastrophic one. But from an American perspective, oddly, it's a good news story: good news in the sense that out of that sequence of events—World War I, World War II, the Cold War—the United States emerges as the preeminent power. That story is an affirming one. It's reassuring. But I think in many respects, from the perspective of where we stand today in 2012, it's a deeply misleading and pernicious one.

That's a long-winded way of saying that what I think Americans need to do is to rethink the twentieth century and devise an alternative narrative and context in which we can understand how we got to where we are today. I would suggest that that alternative narrative should pay a little less attention to the competition for power in Eurasia and pay a little more attention to the competition for power in what we have come to call the greater Middle East, the Islamic World.

AB: I think you're exactly right. To my mind, it's difficult if not impossible to evaluate the course of policy in the Islamic world over the past half-century or so, when we've been major actors, without coming away humbled. So many of the initiatives that we undertook, even those initiatives which in the short run seemed to produce success—for example, overthrowing Mohammad Mosaddegh, the president of Iran, in 1953—those supposed successes have turned into and produced long-term failures. And those failures are tremendously costly, in hindsight, and should dissuade Americans from thinking that we are either called upon or capable of remaking the greater Middle East in our own image.

JO: One of the things that I really liked about The Limits of Power is that you look at foreign policy and domestic policy holistically, which makes sense, but to me it seems like they're often decoupled in our national conversations. You write:

Foreign policy has, for decades, provided an outward manifestation of American domestic ambitions, urges, and fears. In our own time, it has increasingly become an expression of domestic dysfunction—an attempt to manage or defer coming to terms with contradictions besetting the American way of life.

AB: I cannot claim credit for that insight, that foreign policy is an expression of our domestic politics, but the insight is an important one. Historians like William Appleman Williams and Charles Peirce were early proponents of that view. In The Limits of Power, I tend to use Reinhold Niebuhr as a reference point for the argument I'm making, and Niebuhr argues that same point in his book The Irony of American History.

I think it's convenient for politicians to try to put domestic concerns and foreign policy into separate buckets or baskets. But when they do that, they deceive themselves and they mislead us.

JO: Something that comes through in your work is the fact that the president doesn't have the power to change things nearly as dramatically as we would like to think. Given that, what do you think would be the differences between a second Obama term and a Romney presidency, in terms of foreign policy?

My point is that the differences don't matter as much as people make out. The emphasis that we place on presidential elections is largely misplaced. The expectations back in 2008 that putting Obama in the White House would make everything right were wildly exaggerated. I think even Obama supporters recognize that now.

Certainly the presidency is an important office. But I've long since come to believe that the course of events is shaped by factors, some hidden from view, some plainly evident, over which the president has only limited capability. It's important for us to try as best we can to identify those forces. Only if we identify them can it become possible to harness them or to redirect them. The notion that if we get the right guy in the White House, then everything is going to be hunky-dory is absurd. But that expectation has come to be so central to our politics.

JO: You write a lot about the enormous gap, at this point in history, between civilians and the military. How do you think we can get back to a higher level of civic engagement?

AB: The gap between the military and society, which is now, I think, both widely recognized and widely recognized as a problem, is something that I have written about to no avail for quite a number of years now. The reflex solution to the problem is to restore conscription. I see that as politically unfeasible and militarily unnecessary.

So what can we do? One thing we can do is pay for our wars. One of the most pernicious things that the Bush administration did after 9/11 when they embarked upon what we used to call the global war on terror was to saddle future generations with the responsibility of paying for that war. If we go to war we should raise taxes, not lower taxes. We should raise taxes sufficiently to pay for whatever the conflict requires. We should adjust our national priorities accordingly. In that way, the American people would have skin in the game. They would be involved; they would be committed, even if not committed in the sense that they were summoned by their local draft board to fight. Beyond that, I think we should be examining ways to create incentives that would broaden the base from which the armed forces draw their volunteers. I think that ever more generous educational benefits for veterans might be one way to induce a larger percentage of the middle class to view military service as something that might be part of a young person's life.

Jill Owens works in marketing for Powells Books, where interviewing authors is the most interesting part of her job. Shes originally from the South but has lived in Oregon for eleven years and is here to stay.