Can letting our children roughhouse lead to a better democracy? 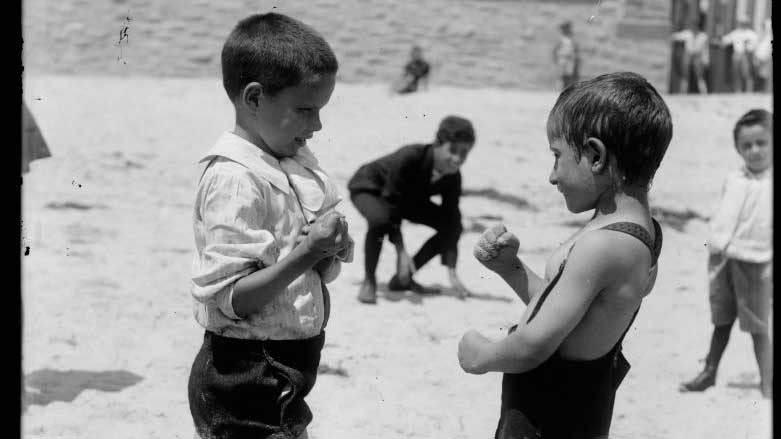 Upstairs, the boys are fighting in the bedroom where my two younger sons sleep and play, the one I have just cleaned so well that there is a wide open space of carpeted floor and relatively few obstacles that could split open a head or bloody a nose. Everett, who at nine has his own room, is throwing Monroe, four and a half and built like a Future Farmer of Urban America, onto the bed. For Truman, six and a half and his brothers' sensitive counterpart, the game is to intervene with either brute force or tricksterism.

I cannot help but photograph them. I catch an artful blur on the sixth try and type with my index fingers into the photo app's interface, “They're like lion cubs.” It's true. They are not just expressing their pent-up energy through playful aggression or “being crazy,” as we say in the family when we have had enough of the chaos. They are at work, learning how to fight. And this is work that they love.

It has not always been so easy, to let them fight and memorialize it on Instagram. Their father, who is out this evening, often discourages such play because he was raised by men who found it horrifying: children were not to be heard, fighting or otherwise, and as our marriage counselor said, your parenting gut comes from your childhood. My childhood sense of fighting was entirely different, usually conducted in tears and screams instead of punches: I was the oldest of four girls and one boy. At home, our work was in nurturing and cookie-baking and small work with needles and hooks and safe scissors. When I did roll and wrestle and toss fists, it was only with my brother; when he finally pestered me enough, my temper exploded, and it was miserable. I hated both the provocation and the eventual physical humiliation, because he always won those battles. But outside of home I argued, usually simply by standing up to the bigger kids, on the bus in defense of my brother. “Sarah's always fighting for everyone!” a younger girl said once, of me, and I was thrilled. Each time, I savored a feeling of exhilaration in my courage and valiant safekeeping of my siblings, which lasted until the next time my brother got me in a choke hold over a “Shut up!” game or some such mockery.

I feel differently today: I wonder if quashing the fight in my brother hurt him, even in some small way, if it stifled a natural impulse until it was so fiery that he could only express it in boiling anger. The more I watched my boys fight, the more I saw that flash in their eyes that looked like pride, like courage, like exhilaration. And so when Monroe became old enough to take whatever his brothers could dish out, I stopped resisting my boys' wrestling and inventive martial artistry.

Everett teaches moves to the younger two and constructs rich imaginary rules for the physics and metrics of their battles, which have become more fair as he has become more patient and mature. I have seen how the fighting has developed from an outburst in anger to a give-and-take, to a careful system of physical play that looks like training, like apprenticeship. Gone is the quest for domination, replaced by the necessary development of his partners' skills. Just as chess is dull with an inexperienced opponent, the fight is nothing without an even match. Now Everett's tenets include accommodation for age and strength, compassion and—yes—nurturing of the brawling talents his brothers display.

I have a rule, too: “When someone gets hurt, you stop.” So they pretend that they are not hurt, or yowl and quickly take a deep breath to calm themselves and say, “I'm okay!” so I will let them return to their jumping and kicking and rolling. I'll hear a cry of pain and come running, only to see Everett comforting his younger brother. “That's okay! You did great! Try it again,” he'll say, “but like this,” demonstrating a flying kick or an elbows-tucked-in roll. And his little brother will return to his position near the canning rack and come charging past the pantry into the kitchen with a battle cry and throw himself at Everett, who smiles. “Yes!”

I've come to see empathy and love in their fighting. I see joy. I have come to see this physical fighting as a pre-verbal expression of arguments and negotiations to come, and I wonder if there's a connection between a fear of conflict that has parents intervening during roughhousing and an authoritative style of education. Perhaps we do not know how to argue because we have not been given the opportunity to practice, both at home and in the classroom.

A recent study from the University of Virginia finds that teenagers who argue—not just argue, but argue well—with their parents learn skills that will help them resist peer pressure. Teenagers who have learned to vociferously and passionately, but in the end, successfully, persuade their parents to let them have their way will also speak up when it comes to the encouragement of irrational and unwise behavior that is part of pubescence. They will be more likely to resist their friends who ask them to drink alcohol or take drugs; they will be more likely to say “no” to sexual experiences for which they are not ready. Teenagers who argue badly—who are incommunicative, who give up easily, who are not listened to or supported in their arguments with their parents—are more likely to take drugs if their friends do. They are more likely to engage in petty crime.

The headlines seem impossible: Fighting is good? How can this be? Hasn't our public discourse already devolved enough? Yet when we look to the highest, most respected minds in history we find voices raised in argument.

In college, I learned the Socratic method, which has enriched me in ways that manifest even now, some twenty years later. Another mother and I compare notes from the past few months: her fifteen-year-old has failed a class, and my nine-year-old has long struggled with his behavior in school. We have both had to reevaluate our dreams for our boys. Her college education was also steeped in conversation: she majored in philosophy at St. John's, a college famous for its use of classic texts and classroom debate as a framework for all disciplines.

Though we do not disagree, we argue fiercely. We ask, “Can my grief be more or less worthy than your grief?” We examine the very nature of comparison and then the nature of grief. We are both grieving our children's departures from the paths we'd imagined for them. Can we develop a new conception of the path to success? What is success? Can we redefine this?

We leave one another opened up, breathless, and vulnerable, but stronger in the core. We have tested our friendship through argument.

But argument is not something that is necessarily taught or modeled in schools, most of which have curricula based on lectures, not Socratic methods. Several studies in a variety of disciplines have demonstrated that few students are capable of learning material through lectures; two to three times as many learn more through in-class peer argument. Even the smallest argument—between a student and the person sitting next to him over the answer to “What is a covalent bond?”—will greatly increase recall of the material and understanding of the concepts.

Harvard physics professor Eric Mazur told KQED in early 2012 about the time when he first began experimenting with peer instruction. He said that 50 percent of the students in his class understood a concept on a test, which, in his opinion, was a dismal result. After trying to explain the concept, he gave up and asked them to discuss it among themselves. Ultimately, he said, “The 50 percent who had the right answer effectively convinced the other 50 percent.” He has used this teaching method ever since.

Because these sorts of teaching philosophies are considered radical and avant-garde, they are looked upon with suspicion, and the lecture remains the dominant form of education for university students in the United States. I believe this has led us, as citizens, to become not only more viciously divided in opinion, but also very, very bad at arguing.

I believe there is good in the fight. It is good to make the argument, to take the questions lilting from big picture to smaller picture to detail to essential nut of our existence. I practice argument everywhere. I am thinking of a counter to my husband's latest financial scheme in the shower. I rehearse my response to an argumentative comment on my blog as I bike to pick my child up from school. I plot a persuasive essay in defense of food stamps as I run seven miles. I shout at Rick Santorum's voice on the radio as I wash dishes. “That argument makes no sense!” I stop the movie I am watching with my kids to describe how the villain has made a grave error in logic. We all practice: I point out the insufficiencies of politic discourse, Everett persuades me, Truman negotiates a footrace with his little brother, Monroe wrests a small toy from another child saying, “What if I give you this?” in a sweet, winsome, practiced way.

Perhaps today's most epic arguments occur because we have not learned to fight well. We, as a nation, have not had as models the sort of arguments favored by researchers, those in which listening and empathy are practiced, in which the winner is the one who is most persuasive. Does the more logical orator win a presidential debate? No, says Jim Lehrer on a radio program as he discusses his book on presidential debates; the one with the best sound bites wins.

I believe the illogical outbursts that occur everywhere today—whether on the Internet or in my laundry room—are a result of decades of poor education and fear, both of physical fighting and of controversy. The society that sends children to their rooms and bans dinner-table discussions of religion and of politics is a society where resentments and misinformation grow bitterly like infections under the skin, until they invade the entire system. If we want to regain our much-mourned civil discourse, we must begin with our young children: We must teach them how to fight. We must teach them to be persuasive in nonviolent ways. But first, we must let go of our fear of the fight itself. We must give our children a chance to practice. We must raise them to argue for what they believe in—in their bedrooms, on the playground, in the classroom, and on the Internet. Only if we fight from a place of core strength and self-confidence, following a system of negotiated principles, can we fight fairly and well.

Sarah Gilbert is a writer and photographer who lives in Portland with her husband and three little boys. She writes about food and finance for several web sites, including DailyFinance, WalletPop and Culinate, is cofounder of the Portland parenting resource urbanMamas.com, and keeps a blog, cafemama.com.