In Bend, residents come together to share meals and conversation. 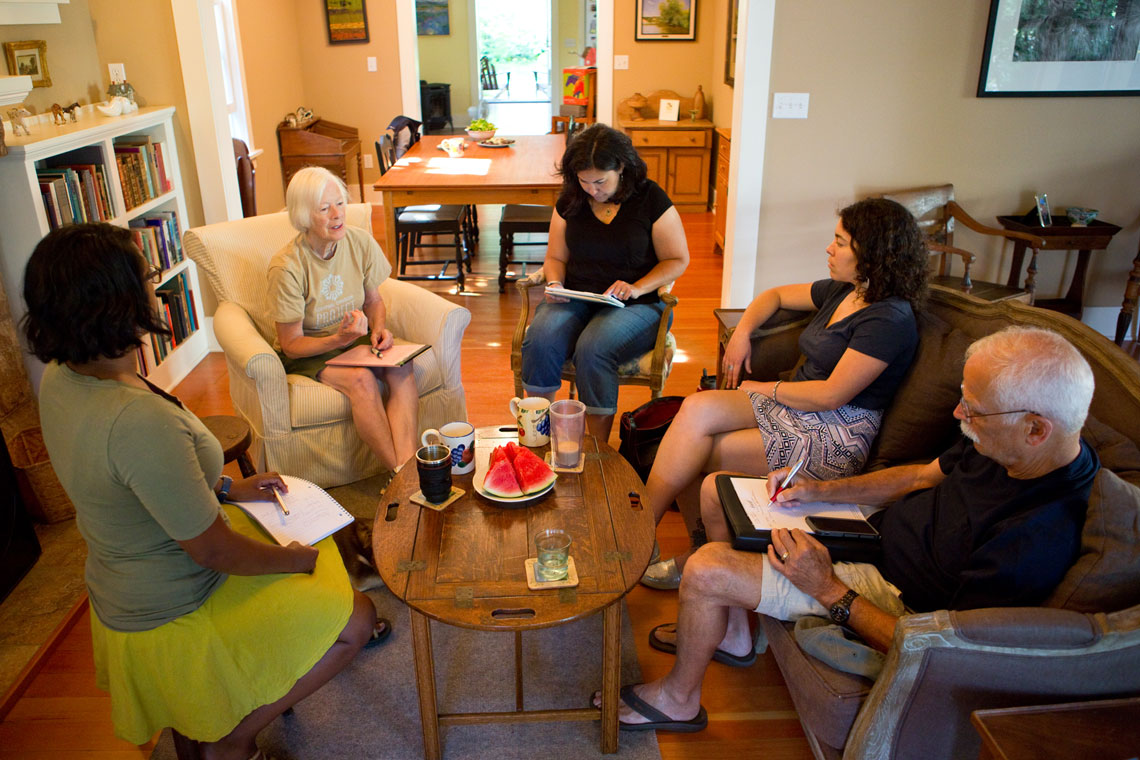 If we thought of our communities as bodies, what would we feed them to nourish them as they grow and develop?

In Central Oregon, community builders Kerani Mitchell and Betsy Warriner are beginning to find answers to this question through meals and conversation. This past June, along with a handful of other volunteers, they launched Community Conversations, a quarterly program that brings Bend-area residents together over a potluck meal to get to know their neighbors and to discuss and find solutions to issues affecting the community. (Mitchell is also a Conversation Project facilitator for Oregon Humanities.)

Warriner says the purpose of Community Conversations is “to bring together people who are diverse in every possible way. To share and listen to each other’s experiences and perspectives. To build relationships across divisions.”

Mitchell and Warriner have found that local residents have a hunger for opportunities to connect with one another. “We’re in an interesting time in Central Oregon’s period of growth because we’re attracting a lot of new folks from outside [who may have] different ideas than some of the folks who have grown up in Central Oregon,” Mitchell says. “I hate to see Bend … become self-segregating just because people are afraid to get to know someone because they’re different.”

More than twenty people attended the first Community Conversations session in June 2017. Over a potluck meal made up of dishes that reflected the diversity of the group, they began their conversation with the question “What does community mean to you?” Warriner says the discussion evolved organically into something deeper and more meaningful as people became more comfortable sharing with one another. She says, “Some of the people who were there shared their stories of how community had failed them, how community had not been there for them and how it could be.”

Although Community Conversations are open to all, the details of what is discussed are confidential. Mitchell and Warriner are able to say that some of the stories revolved around the experiences of recent transplants who encountered pushback from long-time locals when they sought to become involved in civic leadership positions. Others shared their experiences of being people of color in Bend, which is predominantly white. After dinner and the group discussion, everyone broke into smaller circles to talk about a shared topic and to come up with action items before departing.

“We were surprised by the depth of communication from people,” Warriner says. “Most of them didn’t know each other before coming in, and they felt there was a deep level of safety in the room.… I think one reason the conversation went to the [topic of ] disappointments was because there was enough safety to share them.”

The Community Conversations team is still working to refine the program, and plans for future conversations are in the works. They anticipate building on the last conversation by inviting attendees to consider the question “What does your dream community look like?” They are also working on a blog to help foster connection, compassion, and curiosity and a library of resources where people can find information about how to take direct action in their communities. Learn more about Community Conversations at communityconversationsbend.org.

Tiara Darnell is a freelance writer, podcaster, and videographer based in Portland, Oregon. She finds purpose in telling the stories of underrepresented communities. Her work focuses on music, culture, lifestyle, and cannabis.

Tiara's work has appeared in Portland Monthly, Sprudge, Willamette Week, and Medium, among other publications. She is currently the host and producer of High, Good People a "potcast" about the burgeoning cannabis industry from the perspective of people of color.

Tiara is a Maryland native and a returned Peace Corps Morocco volunteer. She holds dual Master's of Science in Strategic Communications and Multimedia Journalism from the University of Oregon School of Journalism and Communication.