Values fall by the wayside for a humanitarian aid worker in Sri Lanka. 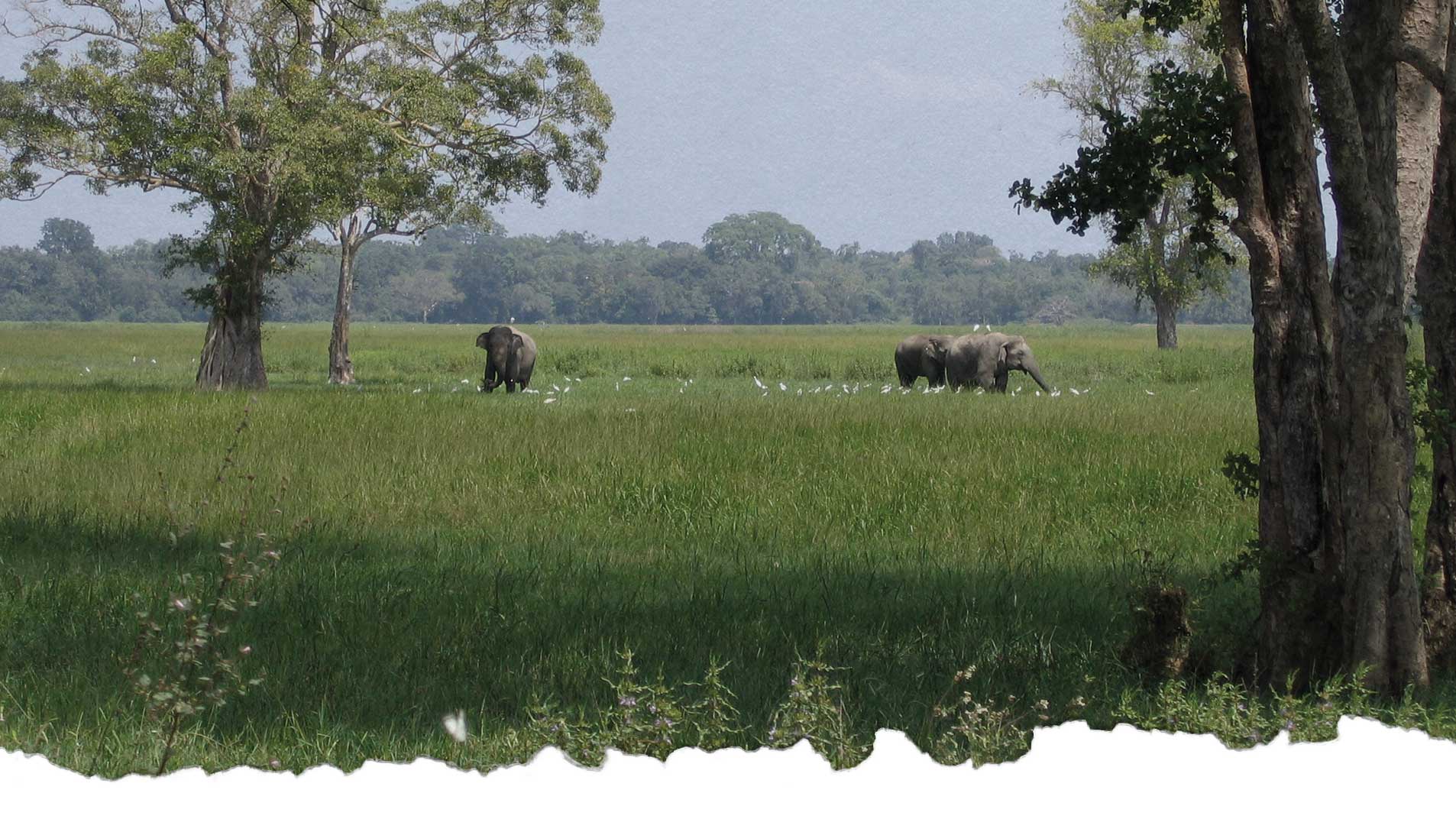 Photo courtesy of the author

I could get nothing into perspective.
—George Orwell, “Shooting an Elephant”

I was midway through my second trip to Sri Lanka when I passed an injured elephant wandering near the road. He was pacing back and forth, just at the edge of light forest and grassland, holding up a leg, in which a bullet was lodged. The wound, open and weeping, was wearing him down with each moment. He hung his head low and he moved his lethargic body as well as he could. His suffering was slow, protracted.

I reasoned that one of the squatters in the nearby forest must have shot him. This was a stretch of fertile earth beyond any established town, where the people hack away brush and light fires to clear the land. They erect cardboard houses with a board or two of wood siding, and work to survive day by day. When the elephants come near, the people fight them off; there is the threat of being trampled in the night, or of losing the gentle beginnings of crops, devotedly planted and protected. I imagined the shooter was displaced from his former land like all the others around him, displaced by the endless civil war or the tsunami's killing waves, squatting illegally near national conservancy territory. He'd set up a modest shelter and hoped not to be moved again.
Like the shooter, this elephant was caught between disasters. The war, the tsunami, increasingly privatized land, a growing human population: his land was disappearing quickly. Between the fences and the encampments, there was nowhere for him to flee when the shooter raised the rifle. Maybe he charged. Maybe he was starting to turn around. As I passed by, I imagined him receiving the bullet in his flesh, trumpeting his shock and pain.

I struggled to believe that a wound the size of a bullet could affect a body as enormous as his, but I could feel the grief and loneliness that radiated off of him. He was stuck in human territory with nowhere safe to hide. I felt it heavy in my chest: to die slowly and without companions, to be surrounded only by strangers and aggressors in such a defeated state. I stared at the elephant's slow pacing from the backseat of my three-wheeled taxi. The nervous driver passed carefully but at some speed.

After those moments, after the elephant was behind me on the road, I tried to put him out of my mind. If I'd seen him weeks before, his proximity alone would have overwhelmed me and ruined me for days. I would have felt compelled to act in some way, certain that my actions to organize assistance would help him survive. But now—after two months of trying to coordinate post-tsunami aid, trying to communicate beyond language and culture with the locals and in any meaningful way with the other volunteers—there was no space left in me for grief or exhaustion. When I saw the elephant pacing near the village, limping and alone, I did nothing. I understood the uselessness of exerting that energy. I contemplated for a moment what had occurred, then let it go.

He died four days later, falling on his side in an expansive, green-gold field. On the coastal land a few miles away where I worked, the local staff became giddy at the news. There were tusks to be harvested. Adventure was in the air—an unsanctioned gold rush, valuable as much for the dangerous, illicit journey west as for the reward. After weeks or months in the dusty, destroyed town, everyone needed something seductive. By mid-afternoon on the day he died, the excitement had seduced me too.

I knew abstractly that I was opposed to the notion, knew that harvesting tusks from an elephant who had died lonely and for no reason did not accord with my values. When I was six, in advance of the Shrine Circus's arrival in town, I composed a letter to the editor of my local paper, commenting on the irony of exploiting wild animals to support sick and injured children. At ten, I stood outside the circus entrance, picketing the use of elephants in the shows. But when night began to fall in this very different world, I joined the pursuit west toward the fallen body and its coveted prize.

In the dusk-gray town on our sandy plot of land, I was the last to enter the van. There were six of us: three Western volunteers and three Tamil staff, their taste for the experience melting my resistance. I shook my head as I found my seat, the final protest from my former self. I slid shut the side door and Subash, our camp driver and co-adventurer, started the engine. We drove straight ahead, through the opening of the makeshift fence and then left onto the road. Within moments, amid the laughter, I found myself smiling too. The elephant is already dead, I reasoned. He's dead and no longer in pain. This is an acceptable journey. We settled into the darkened vehicle as if driving to a hidden forest rave, a secret, nighttime event with danger and anticipation palpable in the air.

As we neared the place where the elephant was said to be, Subash killed the headlights. Accustomed to black nights without electricity, we had come prepared: headlamps strapped to our foreheads, flashlights gripped in our hands. We were miners descending toward coal. But for now, we needed the darkness to cloak our illegal pursuit, so we kept the lights switched off. We wound around dark roads in the van's dark cab. We drove ahead in the near pitch-blackness, all of us staring intently through the windows for a sign of the body we knew we were approaching.

Then we found him. There. Look. Lying a dozen feet from the road, frozen on his left side, the moonlight coating his body, casting shadows in the folds of his skin, crevasses of flesh that carried just enough silver light to define where he lay.

Subash pulled over, turned off the engine, and we all instinctively slid into silence. We flipped our lights on one by one and climbed out of the van with a cautious composure that barely masked the adrenaline pulsing under our skin. We walked toward the carcass, the lights from our bodies illuminating the mammoth form in front of us in small, dancing orbs.

The men immediately noticed that the tusks were gone. There weren't even traces of ivory left, just a small bit of blood and an empty pocket of skin on the side of the jaw that faced the sky. Perhaps another villager had arrived before us, the men lamented, or an official from the wildlife park had come in broad daylight to keep the tusks off the market.

We stayed for a while nonetheless. Standing together, we observed the death as if on vigil, surrounded by night, our flashlights like votive candles, our bodies stationary, poised to offer eulogies. But we were not there to pay homage or to offer our respects. We stayed there for personal reasons. Like distant, absent relatives at a wake, we stood around his body, reflecting on our own lives and our own mortality.

Before we got back in the van, we posed for photographs with the corpse: the novelty of death in a foreign land. In the photos, I'm wearing my worn gray work shirt and tan linen pants, standing next to the elephant, my feet touching his back, my hand on his side, my bottom lip extended to emphasize the grief I felt. His head lay hard on the grass and dirt, his trunk curved upward, his pink mouth slightly parted, his right eye open and staring at the stars. There was an unmistakable track of tears running down his face.

As I looked at that sad stain, something deep within me stirred again. I thought about the horror of being trapped somewhere you don't want to be, alone and without allies. If you feel that no one loves you, I thought, you can begin to lose your mind. 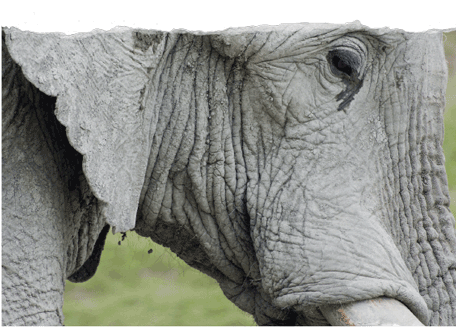 Satya Doyle Byock is a psychotherapist in private practice who writes on topics related to dreams, Jungian psychology, and coming of age in the modern era. She lives in Portland. This piece is excerpted from a larger book project. Photos by the author.

How real and true this quandary talks to me. An exotic locale keeps my attention while the universal message finds a familiar home in the heart. Loneliness is part of the point but the path of life's complexity and conflicting values offers the comfort of acknowledging our own foibles.

Are You My Mother?

The Air I Breathe