Alternatives to police in the Black Freedom Movement 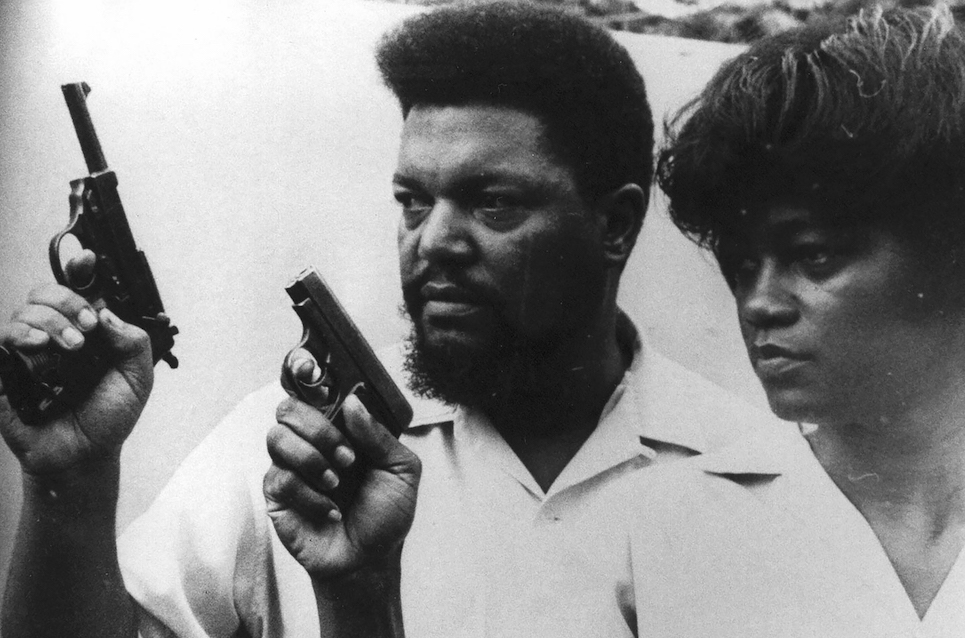 Robert F. Williams, president of the Monroe, North Carolina chapter of the NAACP in the 1950s and early 1960s, and his wife, Mabel Williams. Photo: Collection of the Freedom Archives

There is a question that haunts every critic of police—namely, the question of crime, and what to do about it.

Since the 1960s, the right wing has made crime a political issue and identified it with poor people and people of color. Because the left has largely refused to make crime an issue, it's also failed to challenge this characterization. Successive waves of politicians—of both parties, at every level of government—have learned to stoke the public's fears of rape, murder, drive-bys, carjackings, school shootings, and child abduction, as well as rioting and terrorism, and present themselves as heroes, as saviors, as tough-talking, hard-hitting, no-nonsense, real-life Dirty Harrys who will do whatever it takes to keep you and your family safe. The solutions they offer typically have the appeal of simplicity: more cops, more prisons, longer sentences. The unspoken costs come in the form of fewer rights, limited privacy, greater inequality, and a society ever less tolerant of minor disorder. These political tactics are nothing new, of course, but the scale of their effect—2.2 million inmates in 2010, according to the Bureau of Justice Statistics—is unprecedented. And unless the left can do better, we have to expect that these same solutions will be the ones offered in the future.

The fact is, the police do provide an important community service: protection against crime. It is not their chief function, and they do not always do this part of their job well or fairly—but they do it, and it brings them legitimacy. Even people who dislike and fear police often feel that they need the cops. Maybe we can do without omnipresent surveillance, racial profiling, and institutionalized violence, but most people have been willing to accept these features of policing, if somewhat grudgingly, because they have been packaged together with things we cannot do without: crime control, security, and public safety.

Because the state uses this protective function to justify its own violence, the replacement of the police institution is not only a goal of social change, but also a means of achieving it. The challenge is to create another system that can protect us from crime, and can do so better, more justly, with a respect for human rights, and with a minimum of bullying. What is needed, in short, is a shift in the responsibility for public safety—away from the state and toward the community.

The thought that community-based measures could ultimately replace the police is intriguing. But if it is to be anything more than a theoretical abstraction or a utopian dream, it must be informed by the actual experience of history. One place to look for community defense models is in places where distrust of the police and active resistance to police power have been most acute­—in other words, the Black community. 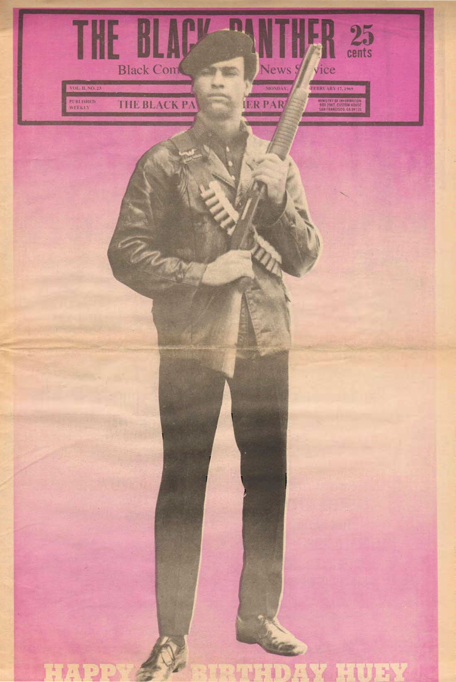 As early as 1957, Robert Williams armed the NAACP chapter in Monroe, North Carolina, and successfully repelled attacks from the Ku Klux Klan and the police. Soon other self-defense groups appeared in Black communities throughout the South. The largest of these was the Deacons for Defense and Justice, which claimed more than fifty chapters in the Southern states and four in the North. As documented in Lance Hill's book The Deacons for Defense: Armed Resistance and the Civil Rights Movement, the Deacons made it their mission to protect civil rights workers and the Black community more generally. Armed with shotguns and rifles, they escorted activists through dangerous back-country areas, and organized round-the-clock patrols when racists were attacking Black neighborhoods. As one Deacon explained, “You wasn't going to receive much protection from the police,” so Black people “had to protect ourselves.” In fact, the Deacons sometimes had to protect Blacks from the police. As one member told journalist William Price, they eavesdropped on police radio calls and responded to the scenes of arrests to discourage the cops from overstepping their bounds. The Deacons also served as a disciplining mechanism within the movement. On the one hand, they worked to calm “trigger-happy” youths seeking revenge against The Man. On the other hand, they confronted “Uncle Toms,” seizing and destroying goods purchased from businesses under boycott. They also helped identify informers, who were then publicly upbraided by a group of women from the NAACP.

Williams and the Deacons influenced what became the most developed community defense program of the period—the Black Panther Party for Self-Defense (BPP). The Panthers, as Bobby Seale put it in his memoir Seize the Time,“patrolled pigs.”Visibly carrying guns, they followed police through the Black ghetto with the explicit aim of preventing police brutality and informing citizens of their rights. When police misbehaved, their names and photographs appeared in the Black Panther newspaper. The Philadelphia chapter pushed the tactic further, with“wanted”posters featuring killer cops.

The Panthers also sought to meet the community's needs in other ways—providing medical care, giving away shoes and clothing, feeding schoolchildren breakfast, setting up housing cooperatives, transporting the families of prisoners for visitation days, and offering classes during the summer at Liberation Schools. (Several of these programs are described in a collection edited by Judson L. Jeffries, entitled Comrades: A Local History of the Black Panther Party.) In Baltimore, they offered direct financial assistance to families facing eviction, and during the summer provided a free lunch to school-age children (in addition to the free breakfast). In Winston-Salem, the Party ran an ambulance service and offered free pest control. The Indianapolis branch provided coal to poor families in the winter, held toy drives at Christmastime, founded community gardens, maintained a food bank, and cleaned the streets in Black neighborhoods. In Philadelphia, the Panther clinic offered childbirth classes for expectant parents; in Cleveland and New York, drug rehab. These “Survival Programs” sought to meet needs that the state and the capitalist economy were neglecting, at the same time aligning the community with the Party and drawing both into opposition with the existing power structure.

The strategy was applied in the area of public safety as well. As much as they were concerned about the police, the Panthers also took seriously the threat of crime and sought to address the fears of the community they served. With this in mind, they organized Seniors Against a Fearful Environment (SAFE), an escort and busing service in which young Black people accompanied the elderly on their business around the city. In Los Angeles, the Party opened an office on Central Avenue and immediately set about running the drug dealers out of the area. And in Philadelphia, neighbors reported a decrease in violent crime after the Party opened their office, and an increase after the office closed. There, the BPP paid particular attention to gang violence, organizing truces and recruiting gang members to help with the survival programs.

It may be that the Panthers reduced crime by virtue of their very existence. Crime, and gang violence especially, dropped during the period of their activity, in part (in the estimation of sociologist Lewis Yablonsky) because the BPP and similar groups “channeled young black and Chicano youth who might have participated in gangbanging violence into relatively positive efforts for social change through political activities.” 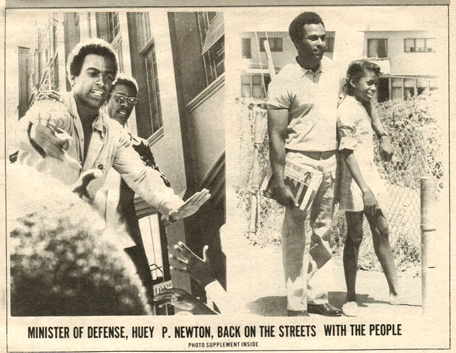 From an issue of the Black Panther newspaper

When the Black Panther Party collapsed, gangs—especially the Crips—filled the vacuum they left. Yet the influence of the Panthers' gang abatement work could still be felt decades later. In 1992, shortly before Los Angeles exploded in rioting after the Rodney King verdict, several of the city's gangs entered into a cease-fire. As documented by anthropologist João H. Costa Vargas in his book Catching Hell in the City of Angels, the process of negotiation had begun more than a year earlier and continued for years after. It was initiated by older gang members and was supported by the Coalition Against Police Abuse (CAPA), an organization founded by former Panthers deliberately trying to keep the Party's legacy alive while also learning from its mistakes. CAPA served as an intermediary between gangs early in the process, and the Nation of Islam provided security during direct talks. Later, CAPA helped found the Community in Support of the Gang Truce (CSGT). In addition to supporting gang negotiations, CSGT offered young people video, computer, and job training, and agitated for reform of the criminal legal system.

On March 27, 1992, representatives of Bloods and Crips sets from four housing projects in Watts—Nickerson Gardens, Jordan Downs, Imperial Courts, and Hacienda Village—signed an agreement modeled on the 1948 ArabIsraeli cease-fire. Gang violence immediately dropped. That summer, truce areas averaged two gang-related homicides each month, down from sixteen the previous year. What's more, peace proved contagious. In his book Street Wars: Gangs and the Future of Violence, Tom Hayden reports that at a 1993 meeting of more than a thousand gang members in LA's Elysian Park, the Mexican Mafia declared an end to drive-by shootings and threatened that those continuing the tactic would be “dealt with” in prison. They specifically forbade the killing of women and children, and suggested that disputes be settled by single combat. Drive-bys immediately declined by 25 percent. By 1998, gang-related homicides were down 36.7 percent.

The truce held for most of a decade, and even longer in Watts—no thanks to the cops. The police did everything they could to disrupt the cease-fires, using many tactics familiar from the COINTELPRO campaign against the Panthers. Hayden reports that police conspicuously surveilled negotiating meetings, and cops raided parties celebrating the cease-fire or promoting neighborhood peace. Truce leaders were arrested on old, minor, or dubious charges, and were sometimes targeted for deportation. Groups like Homies Unidos, which promoted intergang dialogue, found themselves subject to continuous harassment. Police even tried intimidating witnesses waiting to testify about the truce before the California state senate. They also infiltrated the negotiating teams, spread rumors intended to create distrust, and wrongly labeled gang members as informants in a bid to provoke retaliation. CAPA leader Michael Zinzun photographed uniformed cops spray-painting one gang's colors over another's, a likely trigger for a turf war. (The photo was later published in CovertAction Quarterly.)

It seems that, however much the cops may have disliked gang violence, they liked gang peace even less. “Banging” kept the gangs divided, thus weaker, and produced fear and hostility in the broader community (which could then be leveraged into a measure of support for the police). “Trucing” may not have united the rival sets, but it did mean they weren't shooting at each other quite so much, and the effort brought them a level of community support. It's not hard to see why the cops would prefer one over the other. Whatever their limitations and contradictions, in the period of rebellion, gangs represented an armed challenge to state control. As with so much of police activity, here, too, reducing crime is less of an issue than maintaining power.

An excerpt from Our Enemies in Blue: Police and Power in America by Kristian Williams. Reprinted with permission.

Kristian Williams is the author of Our Enemies in Blue: Police and Power in America, the third edition of which is being published by AK Press in August. He is also a Conversation Project leader, facilitating the program Keeping Tabs on America: Surveillance and You.

A conversation with writer William T. Vollmann on privacy, surveillance, and hope

Creative resistance bloomed in the lead up to the Vancouver Olympics. An excerpt from Power Games: A Political History of the Olympics by Jules Boykoff

The Rim of the Wound