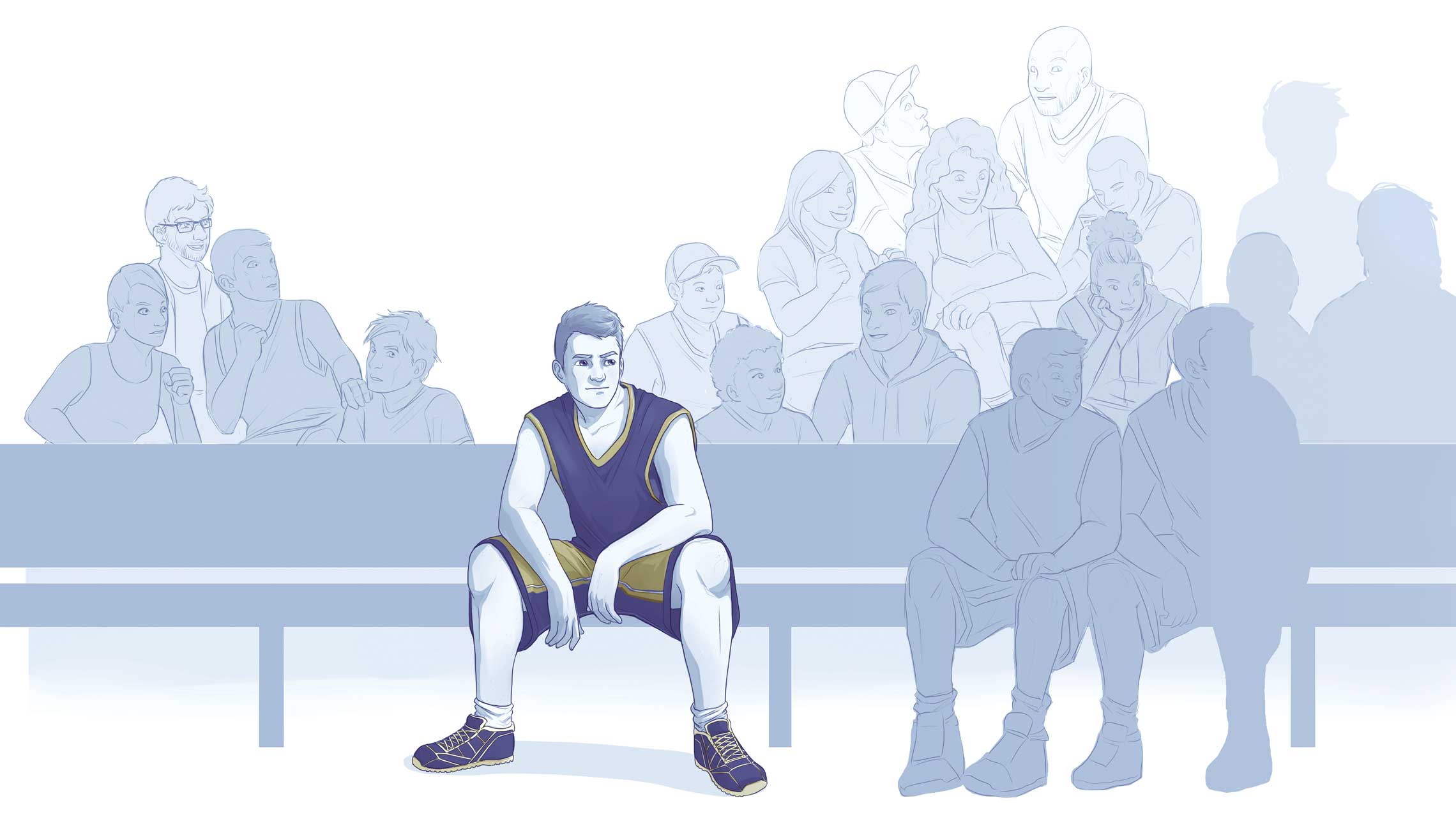 It was huge. It was the most important thing in the whole world. I was sixteen. I had come off the bench the year before, and this year it was my turn to start at small forward, and believe me I had spent many hours that summer envisioning opening night, when we would all be sitting nervously jiggling our legs on the bench, and the announcer, a history teacher, would clear his throat, a deeply strange sound to hear over the public address system in that little gym, and then he would hurriedly introduce the visiting team, and mispronounce their coach's name maybe on purpose, and then there would be a magic pregnant pause, as the hundred or so fans in the stands began to applaud, and then he would Introduce the Starters, beginning with the small deft stern point guard, and then the handsome arrogant self-absorbed shooting guard, and then, finally, finally, after thousands of hours of sweat in the gym and playground, after hundreds of practices and pickup games and drills and long runs along the beach, he would introduce me as the Starting Small Forward for the Cougars, and I would pop off the bench grinning, and slap hands with my teammates, and trot out to the foul line and stand with the starting guards, waiting for our silent burly ferocious power forward and our sinewy center with his small beard in defiance of team rules, and for an instant The Starting Five would stand together; and then the rest of the game would hurry along.

I started sometimes in scrimmages before opening night, and sometimes not, simmering behind another guy who could shoot but did nothing else whatsoever that I noticed; he did not rebound, he did not play defense, he did not pass, he did not set picks, he did nothing but drift around waving and whining for the ball and pouting when he did not get it. He would start one day and me the next, and we went all the way through fall practice and scrimmages against other schools this way; and then, in the locker room as we dressed for opening night, our coach sat down next to me on the worn wooden bench and said bluntly he was going to start the whiner, and he hoped I would take this as a challenge, and work even harder to snatch the job back, and meanwhile be a positive force off the bench, a real leader of the second team, and some other platitudes that I did not register, for I was shocked and rattled, and when he left finally I sat there stunned, one sneaker on and one sneaker off, trying to apprehend the fact that I was not starting.

Yes, I snatched the job back after the first two games, and yes, I kept the job the rest of the season, and yes, it felt great to hear my name boomed around the little gym, and to trot out and stand self-consciously with the guards, and all of that, but I think I will remember the feeling of Not Starting all the rest of my life. I don't think we have come up with a good word yet for the way everything drains out of you and you feel savagely empty and hollow and useless and foolish and mortified and humiliated when moments like that happen.

You know full well you will be startled and stunned again and again by awkward or awful news, and there's no protecting against this.

When you are you are young, you sit there stunned, and then you lose your temper and look for someone to blame, before finding a secret place to weep and kick yourself for ever thinking things would go well; and you swear and vow with grim ferocity that you will never be sideswiped like that again, never, but will be cynical and skeptical henceforth, and so be defended and protected against such blows.

But when you are older you just sit there stunned, unable for an instant to process the news, unable to remember to be equable in the face of awkward or awful news. You don't have the urge to blame anyone anymore, because you know it's not someone else's fault. You don't swear and vow to never hope for anything ever again, because you know that's stupid. You know full well you will be startled and stunned again and again by awkward or awful news, and there's no protecting against this, and you can't really prepare for it, and each time it comes you will sit there rattled and silent and groping for a handle on the next moment. The news is coming, the news will always come, with a telephone call or a terse text message or a blunt bit of electric or paper mail, or with someone turning toward you in the kitchen, looking wan and harried, and saying something slowly, as if each word weighed more than a galaxy.

I used to tell this story of not starting as a basketball story, and then it grew to be a story about all sports, and then it grew even bigger, to be a story about dreams and shatters, about the way we construct ourselves slowly of stories both sweet and sad; but now, deep into my fifties, I am absorbed by what happens after the blow falls. I am riveted not so much by how we sit there stunned but by how we stand up and walk back into the game. You know you are going to get hit, you know the blow is coming, it comes for us all in one way or another; yet we stand up and walk right back into it. This doesn't make sense. But we do it grim and smiling and we don't have good words for this. You could say things like courage or endurance or maturity or grace, and they come close, but they are not quite what you know I mean. You and I have been on that worn wooden bench many times, and we will be there again, stunned and rattled, but somehow after a while we stand up again and walk right back into it. There are a lot of days when I think this grim smiling defiant inexplicable something is us at our best.

Will, Work, and Imagination

To Begin Is to Start

Before You Know It

Small Man in a Big Country