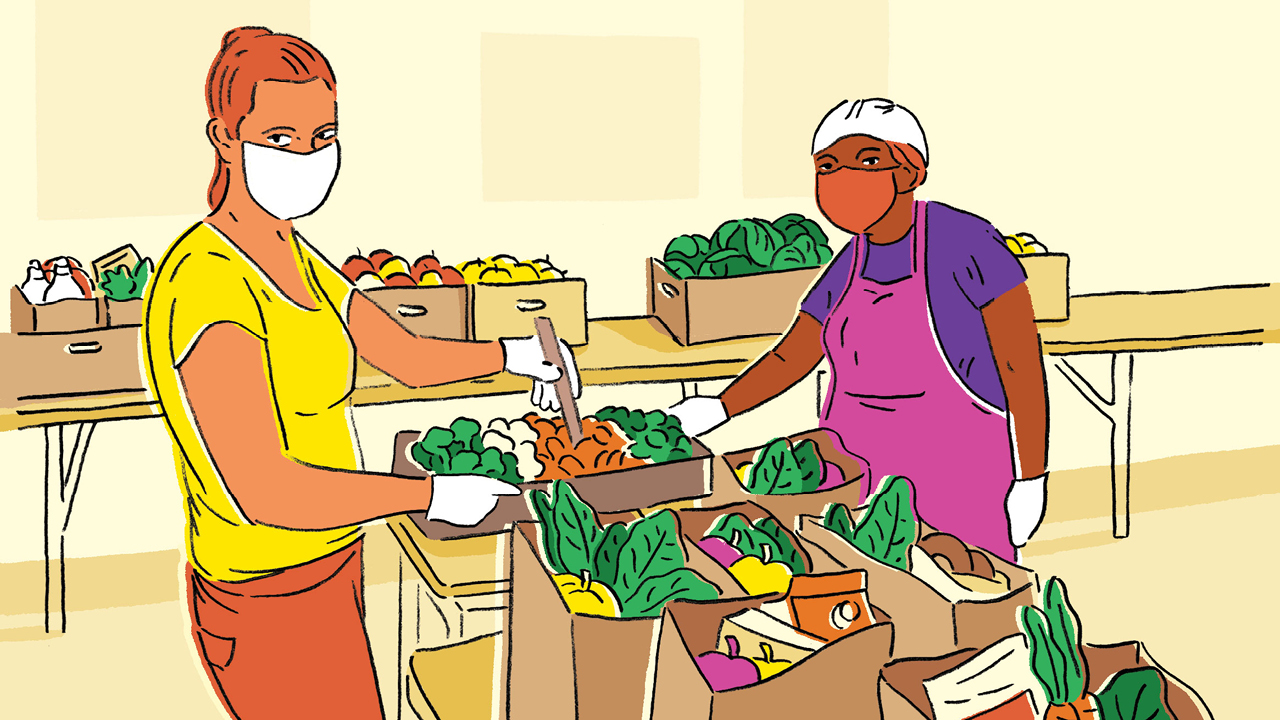 When we first arrive, the park is empty except for a woman playing with her grandkids. My fellow volunteers pop the trunks of their cars, and slowly a few people start filtering over from nearby trails and cars parked on the street.

“Today we have baked ziti, fried chicken, vegetarian chili, or turkey sandwiches,” I say to a tall man with a bushy white beard who has come for a meal. “Which would you like?” He asks for a sandwich, and I retrieve it from a stack of sixty-five boxed meals in the back of a car, along with a ziplock bag full of snacks for later.

“I have to tell you,” he says, “these are the best sandwiches I have ever had, and that includes when I was married and my wife cooked.” He’s not exaggerating—the sandwiches are the work of Sammich, a local restaurant that has been featured on the Food Network twice. Sammich is one of several restaurants here in Ashland, Oregon, that started donating meals to the community a few months into the pandemic. They are one strand in a large web of volunteers who provide approximately 250 free meals per week to anyone who needs one.

Vanessa Houk, one of my fellow volunteers, is another strong strand. Pre-COVID, she and her husband, Jason, along with around fifteen volunteers per night, hosted two free community meals every week in a hall rented from the city. The Houks were able to secure funding in the form of grants and private donations to cover the cost of hosting the meals—around $400 a week—fundraising they did under the umbrella of Southern Oregon Jobs with Justice, where Vanessa is board chair and Jason is a board member. Dishes were prepared by the Houks and other generous community members and were served buffet-style. It was a place for the unhoused and the working poor to have a hearty meal out of the elements and see friendly faces who would ask them how they were doing. A few people would invariably fall asleep after the meal; it was a safe place for folks to literally and figuratively drop the load from their shoulders and relax.

That sense of ease has been hard to re-create during the pandemic. Gone are those donated home-cooked meals. Food must now be prepared in a commercial kitchen and delivered within a one-and-a-half-hour time span to five outdoor locations scattered around town. Instead of sitting down to share a meal, people are now handed a waxed cardboard box and plastic utensils. Volunteers try to check in with folks, but that’s difficult when there is a meal-drop schedule to keep.

“We’ve seen people go from struggling to really suffering,” says Vanessa. “I have people come up to me and say, ‘You have no idea how this is keeping us going,’ and it brings me to tears because it’s just a bag of snacks, but to these folks it means stability.”

On Mondays the meal is organized by Catherine McKiblin, a long-standing volunteer, and made and delivered by eight to ten regular volunteers. The other four days of the week, volunteers from Peace House, a local nonprofit, deliver food to the same locations. Peace House used to host one meal per week at the local Methodist church; the line for the meal routinely stretched from the serving tables all the way back to the entrance of the large hall. When the pandemic shutdowns made indoor meals impossible, Peace House ramped up production to cover three more days per week and switched to delivery. Though their cooks are paid, Peace House relies on three or four volunteers to pack and deliver the food every day. Pre-COVID, most of these volunteers were seniors. When older people were cautioned to stay at home, all food programs in the Rogue Valley were left shorthanded.

“In the beginning, we lost about 125 out of 400 volunteers,” says Jon Pfefferle, the nutrition program operations manager at Food & Friends, which operates the senior meals program for Jackson and Josephine Counties. “But when one group left to safeguard themselves, a younger group of volunteers stepped forward, which was very encouraging to see. People who couldn’t operate their in-person practices—therapists, acupuncturists—those who weren’t able to help in their usual ways came to help us. It was fantastic.” The new influx of volunteers was needed—in April and May, new applications for Food & Friends’ Meals on Wheels program jumped from a couple per week to one per day.

The third drop spot of the night is at Triangle Park, which is flanked on one side by million-dollar homes. On my way there I see Joe, a regular around town, pedaling fast on his bike to reach the park in time for the drop. At this stop, about half of the folks are unhoused, and half are housed. The recent Almeda fire in our valley caused many people to relocate, slightly reducing numbers at the meals, but many of the regulars still come. Kelly comes by—he’s an unhoused senior. I give him the last fried chicken meal made by Bird & Rye restaurant; high-calorie, high-protein meals like that go quickly now that nighttime temperatures are plummeting. Joe arrives, and we talk about what he’s reading these days (fantasy) and about what foods he’s still able to forage around town (blackberries). Though the pandemic has made many things harder, he’s grateful for the daily meals. “Before, there were just four meals a week. Now there’s seven, and you have to remember this is the only meal we eat in a day,” he says.

No one is sure how all of this will work once the wet winter weather starts, but I am confident people will still be fed. This web of volunteers is not easily deterred. As Vanessa says, “I do this because when I look across the table, I see the faces of brothers and sisters, sons and daughters, and it’s one small thing I can do. Someone is hungry, and I know how to solve that.”

Amy Stewart is a graduate of New York University's journalism program. She lives in Ashland, where she founded the Student's Portable Pantry backpack food program at John Muir Outdoor School. As a former whitewater river guide, her favorite place to be is with her family on a river. She covers the outdoor adventure industry, parenting, and issues surrounding homelessness and food security.

Nicely written article about good people in Ashland stepping up.

Excellent article. Great to know that there are saviors in this town. The homeless live lives that few of us can imagine let alone endure.

From the Director: What It Means to Be Seen